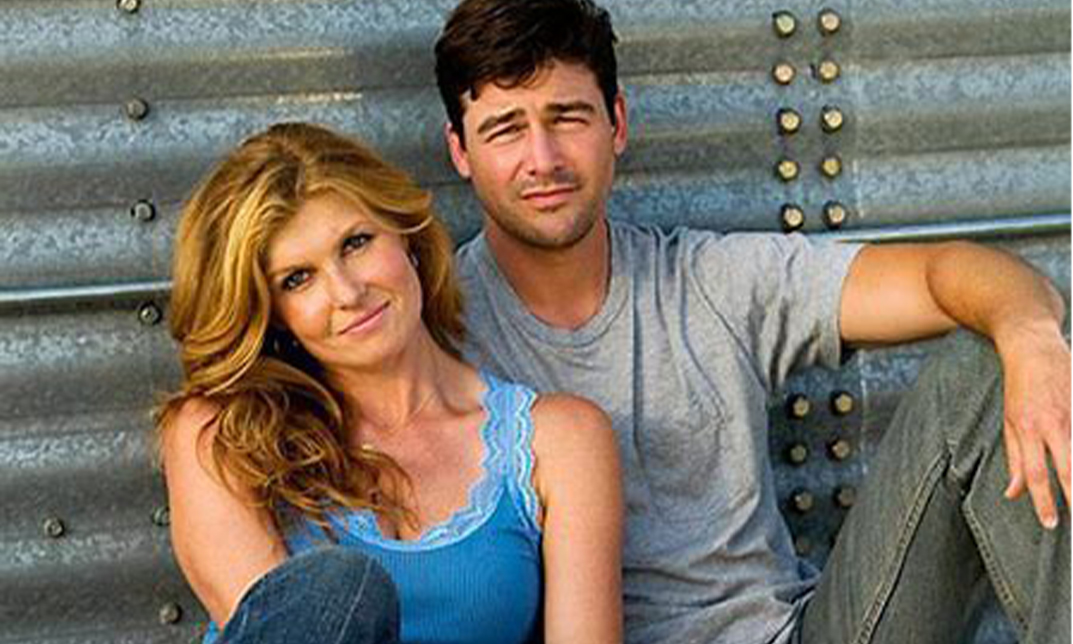 Let me say first that I’m violating a cardinal rule in this Christmas Eve post – using a mixed metaphor. It cannot be avoided, but you be the judge.

The mixed metaphor is in using clips from Friday Night Lights (FNL) – both the movie (2004) and the NBC TV series – and focusing on two different coaches. If there is one unifying force, however, other than Texas high school football, two great coaches, and great teams, it is Connie Britton, who plays the wife of Coach in both the movie and the TV Series, as Sharon Gaines and Tami Taylor, respectively.

Summary: No Connie Britton, no FNL to its millions of fans. And that’s the Championship Game’s final score.

This year my wife, Beth, and I did what so many have done to survive the COVID Crisis – we binge-watched several streamed video series, one episode per night. Over a decade ago we started hearing a lot about FNL, and I’m not really sure how we missed it. As with all series, you have to know the characters, and, if you miss the start, it’s hard to plug in midstream.

As a result, we started this summer with the first episode and went straight through all five seasons. Beth helped me hang in there at first with the comment, “It’s just a soap opera.” Months later, however, we still haven’t gotten over that there aren’t more episodes to watch.

But wait! We still have the movie.

Again, the TV series centers around Coach Eric Taylor, the head coach for the Dillon Panthers (favored to win the Texas State 5A Championship), his team, and their families and friends . It’s based on a true story involving the 1988 Permian High Panthers from Odessa.

Throughout the entire Series, Eric and Tami serve as role models and anchors for nearly everyone in Dillon. Tami begins the Series as Dillon’s school counselor, and eventually she becomes its head with awkward authority over her husband.

(As an aside for those reading from Virginia, Ms. Britton came of age in Lynchburg, Virginia before attending Dartmouth. She  went to E.C. Glass High School, the “legendary” Dillon High of that area.)

Praxis Circle has recently lamented the lack of married role models in movies and TV over the last 20-30 years. Well, Eric and Tami are raging exceptions to this trend. They stay married through thick and thin and never cheat on each other. They are terrific parents. Though far from perfect, they are extremely charitable as friends to all in the town. Eric and Tami have even been rated the favorite couple on TV of all time, and their secrets to marriage success have been carefully scrutinized.

In Praxis Circle’s Christmas card last year, we highlighted various versions of the movie A Christmas Carol, offered five book reviews, and related them, Ebenezer Scrooge and all, to America and the West’s dilemma of unbelievable prosperity achieved through the Miracle, the Hockey Stick, or the Great Enrichment, whatever one wants to call it. Obviously, the Miracle goes by different names, but it’s the vast increase in wealth (30x) produced in America and Europe since 1800, now spreading all over the world. The Miracle is making a realistic goal of eliminating poverty worldwide, as long as government doesn’t control.

My, how times can change in just one year! Not that the Miracle still isn’t happening, but we’ve gone from full employment across every sector of America’s economy and population to substantial unemployment, all in ten months. Even worse, we’ve lost thousands of loved ones from the pandemic.

So, this year’s Christmas theme: We all need Eric and Tami Taylor more than ever. As mentioned in one of the book’s reviewed last Christmas, Strong Gods are returning. They must. I will quickly explain.

I am no movie or TV critic, but the FNL TV series begins with one of the finest short introductions (5:31) I’ve ever seen. Watch it immediately below. It’s key characters, problem statement, and plot are clearly revealed without a word of tell – it’s all show through “random” clips.

Dillon is Americaville – your average blue-collar town with not much going on except on Friday nights and without much perceived wealth-upside or pathways out.

It’s hard to say whether Dillon’s condition is a function of the times or of basic human nature in all times everywhere. The entire Series makes clear, however, it’s not a function of race, sex, ethnicity, education, wealth, or class.

In any case, as usual in any portrayal of culture today, the young women color between society’s lines much better than the men, and they end up controlling most relationships. The men seem bored and are dangerous without attachments.

As you know by now, it’s Eric and Tami that win the town over and do most to further faith, hope, and love in the community. The Series offers a tough road of pain, suffering, disappointment, anger, alcohol and drugs, homelessness, tragedy, betrayal, and crime. But there’s joy and comedy, too, like the moment shown below when Tami becomes Sarah and tells “Abraham” they’re going to have a baby, whom they name Gracie Belle. She’s in the picture with the pigtails at top, looking at the camera.

As we’ve begun suggesting in prior posts, America seems to have been losing its way over the last decade, and it accelerated this year. The nation is badly divided; the various camps harbor too much anger; and they exhibit no humor. Even worse, culture and possibly real relationships are losing the experience (and thus knowledge) of romance. We can’t blame the government, universities, and media, though few there seem to be helping.

We the People need Christmas grace now as much as the world of 0 B.C.

Yes, distribution of the wealth in society is not equal and justice is often hard to find. Indeed, it’s gotten so bad that some will suggest anything. We’re now reading statements like “the gospel of achievement and competence, with its promise of individual sanctification through hard work and success is not the good news Jesus proclaimed. It is, rather, the false gospel of a culture that values efficiency above all else . . . it is a characteristically American gospel.”

My friends, if this person saw FNL the first time, he should go back and watch it again. He missed the message.

In our opinion, the Gospel is not against competence, skill, striving, or competition. In fact, quite the opposite: It’s for them in a Christian way. The drive to enforce material quality, eliminate differences between the sexes, favor various races or ethnicities over others, and cancel all who do not agree and cooperate is what’s killing us. America is experiencing an all out attack on truth, reason, language, and well-established and -earned narrative.

In a phrase, I will suggest that we’ve lost the ability to see life as Christian ladies and gentlemen.

In fact, what made America unlike any other country in the late 1700’s and worth fighting for was the opportunity to create a country where all men could be gentlemen. Regardless of how we got here, all men are free to be this today. Being a Christian gentleman means many things, but being kind, serving others, and only using force when necessary – and not against those weaker – is right up there at the top. Men’s duty is to protect and defend; not male-only but primarily so.

There is much evil in the world, and men create most.

Of course, much of the fight today is over what it means to be Christ-like, and I would suggest that no one has a monopoly on its meaning.

Coach Taylor tries to instill in his players that respect and trust are earned not given, and that each man must do his part as well as possible to uphold the team. Teams succeed through cooperation and mutual support, but they also depend on heroes. Notice how Coach Taylor addresses his players as a group. He says the types of things most men want to hear – they want purpose in their lives with duty.

If you want a primer on Coach Taylor’s keys to manliness and success you can watch this or tune into his pre-Championship game speech or his halftime speech, when they were down 0-26.

What struck me from the start is that Coach Taylor always refers to his players as “Gentlemen,” and he insists that they strive to live up to this immense honor as human beings on the field and off. It is infectious, and it works for the young men and inspires all women in Dillon, too. This is what good fathers, coaches, and friends do.

Who wins and loses doesn’t matter in either the movie or the TV Series, and I won’t tell you what happens. In fact, there are several championship games, and they shake out different ways.

But if you want to cheat and enjoy another montage like the TV Series opener above while you wait for your favorite Holiday championship football game, have at it immediately below. For raucous, chaotic, and happy American endings in games and in life, Animal House and Bad News Bears don’t hold a candle. Perhaps only Sandlot would.

Finally, this brings us to the video at the very top. It is Coach Gaines’ final Championship game speech. I would argue it’s an intensely Christian statement right out of Matthew 5:48 and Galatians 3:28. “It’s not about winning, it’s about you and your relationship with your family and friends. If you can do that, Gentlemen, then you are perfect.”

I would only add that, as Christians, we ought to include God at the top of our relationships, which the Gaines’ team then does by saying the Lord’s Prayer together at the end of the clip, along with the Carter team from Dallas in the other locker room! Nobody should have trouble with this because Christians are sincere in their actions, can’t always be certain when they are right, and are crazy enough to pray for their “enemies.”

God isn’t a man, but Jesus called him Father. We have to pray some way. What happens one way or the other is God’s Grace.

We need our role models, we need our coaches, we need our Savior. While the City of God is one thing, the City of Man can have its prince and princess charming, create the miracle of Gracie Belle, and win the game of life. We have received this hope, and we need it now more than ever.

“God rest ye merry, gentlemen” is an old English song going back centuries. It’s been translated into today’s English: “May God grant you peace and happiness.”A Christmas Carol makes reference. With the link in red and green below, please see a short video with a lively rendition. All five verses appear below, as well.

From me and my family and from Praxis Circle, with Ebenezer Scrooge, to you and yours:

Let nothing you dismay,

For Jesus Christ our Savior

Was born upon this day,

To save us all from Satan’s power

When we were gone astray:

O tidings of comfort and joy,

O tidings of comfort and joy.

2. From God our heavenly Father

And unto certain shepherds

Brought tidings of the same,

How that in Bethlehem was born

The Son of God by name:

3. The shepherds at those tidings

Rejoiced much in mind,

And left their flocks a-feeding

In tempest, storm and wind,

And went to Bethlehem straightway,

This blessed Babe to find:

4. But when to Bethlehem they came,

They found Him in a manger,

Where oxen feed on hay;

Unto the Lord did pray:

5. Now to the Lord sing praises,

All you within this place,

And with true love and brotherhood

Each other now embrace;

This holy tide of Christmas