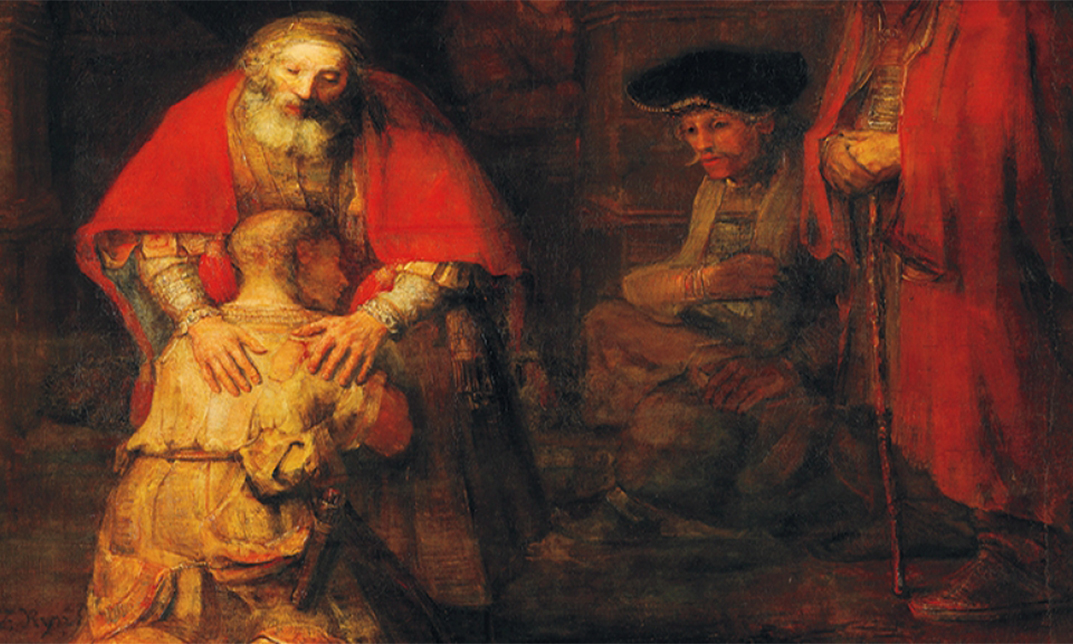 Please watch the two videos above before proceeding.

The purpose of today’s post is to introduce our two new Expert Contributors for 2020, Mr. Khizr Kahn and Mr. Hugh Whelchel. Due to the COVID situation, we were forced to reduce the number of new Contributors from seven in 2019; we hope to resume 2019’s pace this coming year.

As Forrest Gump says, Khizr and Hugh fit together like “peas and carrots.” One is a Muslim leaning Democrat and the other a Christian leaning Republican. They are both beautiful Dads who love their country as it was founded and as it has developed ever since, for better or worse.

Having read their books, studied their lives, and spent the day with each man, we believe that they could sit down and find much common ground in the political space that would improve the country. We also believe there is a lot more common ground like this across the U.S. – it just doesn’t seem to show itself much in DC.

Maybe this will improve in the future; we certainly hope so.

In the West today, the virtues of faith and hope undergird the primary virtue, love. The Classical world of Greece and Rome over the last 2,000 years offered the added foundations of truth, goodness, and beauty. In our Constant Contact pitch for today’s post, we suggest that America needs more honesty, truth, courage, and love.

Well, this is what Khizr’s and Hugh’s lives – and the lives of their families – will offer you. In fact, this is true to such an extent that their lives can only be called beautiful. That last word, along with love, is perhaps the least definable of “value” words, but perhaps the word that best describes with love what we seek most in our lives. Beauty and love bind us to Nature.

Today’s post also ends our five-part Series on Men, where we’ve tried to suggest that men are the source of most of our social problems and perhaps a key to fixing them. We are certain that both Khizr and Hugh would agree that one’s relationship with God is primary and that the foundation of civilization across the globe is the family.

If this is true, then more good fathers are a must for more good civilization. All of social science supports this assertion; in our opinion, so much so that no citations are necessary.

Instead, we will offer a quote from a recent bestseller received from a son and daughter-in-law on Christmas Eve – both having read it – entitled Stillness is the Key (2019) by Ryan Holiday from his chapter, “Enter Relationships”:

A good relationship requires us to be virtuous, faithful, present, empathetic, generous, open, and willing to be a part of a larger whole. It requires, in order to create growth, real surrender.

No one would say that’s easy.

But rising to this challenge – even attempting to rise to it – transforms us . . . if we let it.

Anyone can be rich or famous. Only you can be a Dad or Mom or Daughter or Son or Soul Mate to the people in your life. (page 144)

Mr. Khan is a lawyer living in Charlottesville, VA with his wife, Ghazala. He was born in Pakistan as the eldest of ten children, moving to the United States in 1980. He is the father of three sons. In 2004 he lost his middle son, U.S. Army Captain Humayun Khan, to a suicide attack in Iraq. Captain Khan was posthumously awarded a Purple Heart and Bronze Star.

In 2016 Ghazala and Khizr Kahn were rated by Politico magazine among the Top 50 persons (#8) transforming American politics. Mr. Khan wrote a book published in 2017, An American Family: A Memoir of Hope and Sacrifice, offering his and his family’s story. He began life as the son of a farmer in Pakistan and worked his way into an education at Harvard Law School and a successful legal practice in Silver Springs, MD.

We highly recommend this book. It provides an education in differing worldviews and cultures. It’s a universal primer on how to succeed in life. It’s also a primer without intending to be one on how to be a great Dad. Every person spoiled by America’s freedoms and wealth should give it attention. We have so much to be grateful for in the U.S. and so much to improve on.

Mr. and Mrs. Khan were thrown onto the national stage in 2016 when Mr. Khan gave the speech offered below to the Democratic National Convention. He challenged soon to be President Trump’s suggestions during the 2016 campaign concerning how to treat Muslims under certain circumstances who seek travel to America:

We believe Mr. Kahn is unique as a Muslim: He carries The U.S. Constitution in his pocket and hands out copies. His memoir linked above describes how he instantly fell in love with The Declaration of Independence when he discovered it in Pakistan while in law school. He offers a refreshing perspective we don’t get studying our own history today that tends to portray American now as the original Evil Empire.

Rather than as an expression of supremacy, Mr. Khan as a law student saw The Declaration as a universal expression of popular will against a colonial power, reflecting Pakistan’s situation at the time. To him The Declaration from just the four corners of the document expresses a universal desire for freedom and self-rule. He is in awe that a people could start fresh and create a country from scratch, and he is still in awe of our Founders’ constitutional expression.

His sons went to UVA and his home today rests on Thomas Jefferson’s mountain, Montebello.

It’s very hard to introduce a one-to-two hour interview with just one or two clips in a blog. What we end up doing is trying to pick clips that we think the Contributor would want us to feature, knowing that we aren’t mind readers.

We hope you will go to Mr. Kahn’s Personal Page using the link above and watch his Full Interview at the bottom, or at least skim the clips for those you find most interesting. We think you will be surprised at what he has to say about American life, Islam, Sharia law, various political issues, and freedom.

As a final clip to highlight here, we offer the one below because we know it’s important to what Mr. Khan is doing now. And it bolsters our claim that Khans are obviously brave men.

Mr. Whelchel is the Founder and Executive Director of the Institute of Faith Works and Economics (IFWE) and a former businessman, who operated primarily in the computer industry. He resides now in Leesburg, VA with his wife, Leslie. He’s the father of two girls and one boy.

Hugh was attracted to serving Christ early in life, but he didn’t get there on a full-time basis until asked as a “turnaround consultant” to assume leadership of the Reformed Theological Seminary in DC. Please refer to the link to his Personal Page at top for a more detailed biographical summary.

We were drawn to IFWE eight years ago because of its approach to Christian worldview – that God wants 100% of us every second, and this especially includes work. Furthermore, IFWE appreciates how CJC (Classical Judeo-Christianity) has shaped Western and American society, culture, politics, economics, and art since inception. We offer here IFWE’s introductory video with this in mind.

Hugh believes the Christian story is revealed in Genesis and then fulfilled throughout the rest of the Bible. As expressed in the video at top, he believes that the Biblical concept of Shalom is an important aspect of the Judeo-Christian narrative that Christians often miss. He covers this well in his excellent book How then SHOULD We Work? Rediscovering the Biblical Doctrine of Work (2012) and in his talk linked here, “Glimpses of Shalom.”

Shalom is what God created man to do and what Christ made possible in this life when He broke into time. Mr. Whelchel offers the following definition of Shalom, quoting Cornelius Plantinga:

. . . the webbing together of God, humans, and all creation in justice, fulfillment, and delight . . . Shalom means universal flourishing, wholeness, and delight – a rich state of affairs that inspires joyful wonder as its Creator and Savior opens doors and welcomes the creatures in whom he delights. Shalom, in other words, is the way things ought to be. (page 92)

How to do this? We will note that Hugh’s book How then SHOULD We Work? describes for Christians a primary calling to Christ, followed by a balancing of secondary callings to our family, the church, community work, and work.

As far as how we might approach the dreaded 9 – 5 Monday through Friday, he offers us just in time for football bowl games and the transition to basketball season the wonderful story below about the incomparable UCLA basketball coach, John Wooden. In this, having read his memoir, we’re quite sure that Khizr Khan would agree.

In conclusion concerning these two beautiful Dads, Khizr and Hugh, it occurred to us that the two books we read this year by Tim Keller, a terrific advocate of Western worldview, were The Prodigal God: Recovering the Heart of the Christian Faith  (2008) and Uncommon Ground: Living Faithfully in a World of Difference (2020, co-edited with John Inazu).

In The Prodigal God, Dr. Keller describes the parable of The Prodigal Son as a metaphor for the entire Christian message, with the father portrayed in Rembrandt’s famous painting above modeling how God Himself loves each and every human being. Uncommon Ground addresses how we might approach each other in a world of deepening and serious differences.

Mr. Khan and Mr. Whelchel are honest, true, brave and loving fathers. Both risked the dangers of COVID to participate in our interview, and we thank them very much!

Mr. Kahn gave everything to provide for his family and taught his sons to serve their community and country. Mr. Whelchel did much the same and even consented to the interview months after learning in early 2020 that he had contracted ALS. He comments on this in his Full Interview in clip Number 49.

Regardless of their human flaws, these two men, children of the God of Abraham, are world-class Dads; we need more of them. And it should not be surprising that Mr. Khan had on his table the book on the left below and Mr. Whelchel the book on the right. This was total coincidence with no connection between the two.

We can all be hopeful for 2020 with such compassion.

As Mr. Kahn and the poet Rumi say in the clip at top, “Out beyond the world of right and wrong, there is a field. I’ll see you there.” As Mr. Whelchel and the Book say in the second clip above, “Shalom.”