The purpose of my first Compass post in 2021 is to introduce Stephen D. Meyer’s brand new book, The Return of the God Hypothesis: Three Scientific Discoveries that Reveal the Mind behind the Universe. Dr. Meyer introduces this book himself in the video above (1:27). It is a humble title written by a humble man who must keep his seat at the table of an academic world that largely opposes recognition of any design theory involving a Creator/Sustainer.

Since Praxis Circle is not bound by that culture, we can be more direct. First of all, the God hypothesis has never for a second left Western Civilization. That’s why we got into science in the first place hundreds of years ago. Western Civ has been developing the God Hypothesis steadily and consciously all the way.

Which is a nice introduction to the second point Dr. Meyer clearly demonstrates that I will state in more ordinary American vernacular: “There ain’t no *!*! way God don’t exist.”

Yes, we mean just that. As close to zero probability as we get, without giving up all skepticism about man’s ability to know. Certainly, we will always need faith in science and religion, the two being congruent in the West, but at this point, we can be pretty darn certain that a Designer must be designing life in this world just the way we find it right this very instant; just for a sec, even though, apparently, it just slipped into the past.

Admittedly, the specifics of this last part are a matter of ongoing, philosophical, “scholarly” debate. (Oh, please.)

The other thing I want to do here is to answer the question: What do soldiers on the march or in the trenches seek (other than victory and to be home with one’s “girlfriend” – or boyfriend – as the case may be); why do they fight?

Today, knowledgeable students of war would paraphrase it this way: “They fight for God, country, and their brothers.”

Which leads us to divine providence.

Most soldiers know what instinct tells them and what they’ve been trained to know. They can only win by fighting together well. My nephew is going through U.S. Army boot camp right now. The key point of fighting well together is obvious from the few pictures we’ve received from him in training. God bless, young Mark Monroe. He is a great American.

But most soldiers also know they must long-term have a good cause and God on their side, too. As they say, there are no atheists in foxholes.

This is how soldiers get introduced to high theology, which probably peaked somewhere in the 18th or 19th Centuries in the West before the onslaught of militant naturalism and the flat-out assault of every worldview foundation Western Civilization has constructed for the last 3-5 thousand years.

But again, this is where divine providence comes into play. It’s up to us.

Columbus, George Washington, Abraham Lincoln, U.S. Grant, R.E. Lee, Woodrow Wilson, and FDR all got the memo. Now we have The God Hypothesis.

What is divine providence? Tough to explain well in a short post.

To give it my own spin: It’s a combination of fate, radical freedom, and grace all-in-one – a paradoxical idea, like being a divine human. Most early Americans, male and especially female, who ventured to the New World lived their daily lives by this revolutionary concept. (And what they found were many Native Americans doing the same thing a bit differently. Divine providence is a universal idea.) It has been expressed in Western literature in various ways since the beginning.

To pick one immensely important but little known example, see Boethius’ The Consolation of Philosophy (524 A.D.). We have mentioned this short, little, and very readable gem before. Boethius was a classically trained Christian executed for his beliefs. His book classic has been referenced with the Bible as one of the two most important works of the Middle Ages, especially to thoughtful soldiers and knights.

Fate is the idea that God stands outside of time and sees all of it as an artist sees her painting, having created the entire landscape. From our human perspective inside the painting, once “stuff happens,” it becomes objectively true and sealed in “fate” that God foresees. In this world time might change speed, but it doesn’t seem to reverse.

And yet, man is free (and there’s the definitional word freedom) inside the painting in all present time to influence the outcome. All of us must do so as “creators” of time and events oursleves. In other words, “it isn’t over until we, including and especially God, say it’s over.” And God will make The End known to us.

And now for perhaps the biggest word of all (other than “God” or “love”): Grace.

In the sense of Dr. Meyer’s book, Grace is the concept that God in an act of grace created the universe and history and intervenes in every moment in an effort to aid humankind – which often inexplicably determines the outcome. All military people understand this at a far more granular level (“the bullet just missed my head”), but it’s equally applicable in peacetime.

Soldiers know they need God, and they want God on their side – and they also know they must sincerely try to earn it, whether their efforts actually influence the outcome or not. (As an aside, we are not talking about salvation here – a whole different theological matter that’s much more controversial across monotheisms.)

But to soldiers it was clear throughout early pagan and all of Western times through today that, again, one needs God on one’s side. Only the cynical, stupid, or severely conscripted soldier would go into a fight with a lot of doubt about that – though it’s often necessary given the crazy positions governments or countries assume and force them into.

“We will make it through this somehow with the whole team together.”

Praxis Circle will be coming back to Stephen Meyer and his wonderful books repeatedly. We have been following this kind of literature carefully for 40 years, and The God Hypothesis is the best, most recent summary that laymen can pretty easily navigate.

There is a reason why our enemies know that “God has special providence for fools, drunks, and the United States of America.” We just can’t be foolish or drunk getting into the trenches or finding our way out. Prayer and effort make a big difference.

For another take on divine providence, please see Wiki here. We only use that source when it does a good job, as it does in this case. Or watch Dr. Tim Keller’s explanation here (7:08). He is one of our worldview favorites:

Again, women, too, were and are betting their lives on divine providence whether at home or elsewhere. Women just weren’t thinking about doing much fighting until fairly recently, and most still want the best team on whatever field. As you probably know, Grace as a theological concept is much larger and has much wider applicability than what we describe in this post.

Indeed, many believe that’s what God is: Love, Grace, Power, Truth, Goodness, Beauty. That’s not all by any means, but we’ll leave it at that.

In any case, I am here in May 2021 to tell all of the soldiers of the good fight – whether during peacetime or otherwise – that Dr. Meyer’s book is the best summary of why we can be 100% certain, as of now, that God – a divine Mind – exists and that God intervenes in human history on our behalf as He deems desirable. His work goes back ~13 billion years to the estimated beginning of time and ~4 billion years to the estimated beginning of life. (Again, Dr. Meyers is simply not in a position to give it to you in as straight a skinny as we can.)

EVEN AND ESPECIALLY SCIENCE IS TELLING US THIS, AND IT HAS BEEN SINCE THE INCEPTION OF “MODERN” SCIENCE. Do not let them tell you otherwise. All else is hoo-ha.

I know this is hard for you to believe, a sign of our steady cultural brainwashing. Dr. Meyer explains it well from different angles in numerous places, and we’ll summarize some arguments in later posts.

Not only does Dr. Meyer use science to make the strongest case imaginable for God, he also uses it as he goes to make the case for theism over humankind’s other three conceptually dominant worldviews: deism, pantheism, and materialism. (He does mention “panspermia” because there are scientists who take it seriously – the idea that men from Mars planted life on earth – but we’ll skip that one.)

I cannot do this part of the book justice in this short review, but Dr. Meyer does masterful work here that only a man of his knowledge and long experience could do. Indeed, he makes a number of very famous scientists look like silly philosophers in the process.

(As just one example of silly, see the Stephen Colbert interview of Lawrence Krauss at the bottom of this PC post, 7:45.)

In any case, after finishing the book, I wrote on its front pages: “This book makes me angry because I realize I have been misled with the intent to deceive by many academics my entire life. As of now, there is no question there is a Designer. This is a humble starter for New Christian Thinking in the 21st Century. One of the greatest theologians/philosophers of the 20th Century, John Paul II, is smiling.”

Whatever your position on spirituality, get this book, put it under your pillow like the greatest soldier, Alexander the Great, did with The Iliad, study it, and learn its worldview arguments for theism. While the Bible is the Jewish-Christian Iliad, we need to understand and face militant nihilistic secularism humbly on its own terms.

America and Europe are in trouble because we haven’t been doing this well – and we trusted “them” – too many educators. This is what’s needed to save America and Private Ryan today during peacetime at home.

“Proving God” didn’t work between 30 and 33 A.D., and it probably never will, due to the limits of knowledge and human nature itself. But while God will not likely ever allow laboratory proof of Self, He has showered us with all the signs human reason could ever need. “Scientific materialism” isn’t doing God in. It’s already dead man walking.

So, God bless our soldiers, especially those who God called back to Him on the battlefield. There would be no United States without them. By definition, General Patton’s prayer worked in the desperate Battle of the Bulge near the end of World War II. Divine Providence is still ours’ to lose. Again, Happy Memorial Day Weekend.

As sources presented here suggest, we should probably drop the first word qualifier and simply say Providence; there’s only one kind that truly matters. A final note: If life is nothing more than a power struggle, then bring it on. We have a very good team. 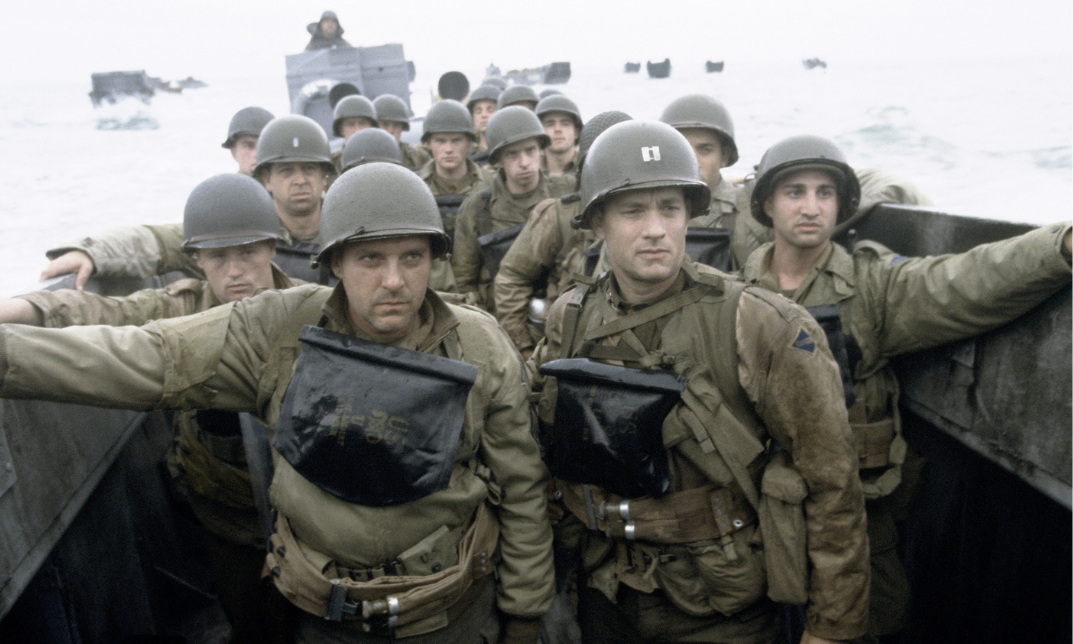