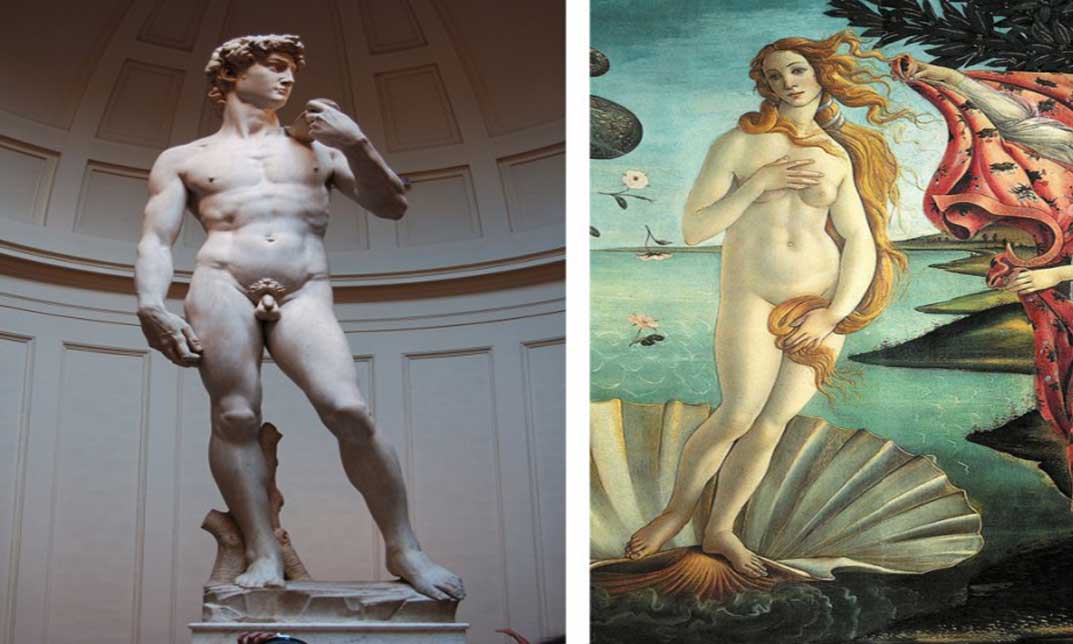 For your pleasure today we offer two of the most beautiful male and female “figures,” we shall call them, in Western art, Michelangelo’s “David” and Botticelli’s “Venus” (“Birth of Venus,” actually) created in Florence, Italy between 1485 and 1504.

(Please note: While the Rating Agency warns us David and Venus are dangerous, we remain selflessly committed to pushing the beauty envelope to the max for Praxis Circle Members and viewers. In fact, no one tells us what art to feature; no one.)

In any case, today’s question should be important to worldview fans, especially those interested in politics: Do figures lie?

Are David and Venus marble and pigment-on-canvas only, or are they up to something?

Further note: If you’re short on time, SKIM DOWN TO THE BOTTOM and scan our chart showing a breakdown of current American income levels in quintiles (20% blocks), adjusted to show free, spendable cash flow. Then read Phil Gramm and John F. Early’s article from the 11-4-19 issue of the Wall Street Journal inserted below that at the very bottom.

We should all consider such essential “figures and facts” to hone our worldview early in 2020.

Q and D (“Quick and Dirty”) posts like this one feature short but important notes often highlighting facts and figures that might influence worldview. As an element of the praxis process, people are constantly reviewing facts – moment-by-moment – and adjusting their strategies and worldviews, accordingly.

Interesting questions are whether facts have any meaning at all without worldviews and how they do influence worldviews, values, and morality, but we’ll save such questions for later.

Right now, we’re simply serving up some interesting facts about the distribution of American income to set beside your own worldview to see what you think.

Above we provide a clip of Deirdre McCloskey criticizing Thomas Piketty’s well-known book, Capital in the Twenty-First Century (2013)  Dr. Piketty is a French economist who associates his book with Marx’s famous Das Kapital (1867). While Piketty admits Marx was wrong in all of his basic economic theories, he points out that Marx is still an inspiration to him and many others, having labored for 20 years using detailed economic data to prove his theories (which then all turned out to be false).

Picketty’s Capital thesis is qualitatively and quantitatively Marxist: Capitalism in the 21st century will relentlessly increase inequality in the long run making the rich perpetually richer and the poor perpetually poorer. Like Marx’s big book, Picketty’s Capital presents an impressive array of macro “figures” . . . or numbers . . . that lead him to make certain observations like:

Again, we raise the question: Do figures lie? Would David and Venus do that to us?

But we do need to know much more to begin making judgments than Piketty provides in that one key sentence.

Piketty’s book makes an impressive stab at some of these questions – that’s why the book’s 577 pages – but it does fall short in many ways. The chart offered at bottom here helps ground this initial inquiry in current (2017) American micro data.

While no one would argue today that CEO’s of large companies aren’t paid enough or that the top 1% aren’t doing very, very well, thank you very much, no one knowledgeable would argue either that virtually all in America aren’t much better off in a material sense than in 1980. Indeed, Piketty’s Capital has been beaten up pretty badly since 2013, even by those most concerned with helping the poor, like Dr. McCloskey.

Again, understanding “the numbers” or figures requires getting behind the macro facts and, particularly in Piketty’s case, getting underneath and behind his presentation and into the micro and qualitative data.

What we find when we do that is there’s nothing terribly radical or nefarious going on in America – though ultimate judgments always come down to “Says who?” and one’s worldview.

Several of Dr. Piketty’s arguments are easily questioned by looking at his own data. Often his own graphs show inequality (as defined in aggregate) obviously moving up and down with economic cycles and historical eras, so there doesn’t seem to be anything going on due to structurally inevitable growth rates – and that’s the main point of the book.

No one has ever doubted that those in the upper 1%, deciles, or quintiles do not make more than those in the lower ones because “the rich” always have much higher earned incomes and more wealth (that also produces unearned income in good years). Claims that the rich are richer are mere tautologies without facts and circumstances addressing micro fairness and legality.

But just as football stars have a tough time repeating as the NFL’s Most Valuable Player year-aftter-year, it’s very tough in a highly competitive American economy for anyone to stay on top of the wealth pile for decades.

How’s Jim Brown or Bret Favre doing today? Owners and coaches are constantly having to adjust for the Lamar Jacksons, Patrick Mahomes, Jimmy Garoppolos, Tom Bradys, and Russell Wilsons of the world, who help get teams to the top, so as not to crowd out all the other terrifically key and under-appreciated players.  But they need the freedom to do so, else they can’t be held responsible by team stakeholders, especially the fans.

Fans understand this and still love their MVP’s. Most important, those who understand best want to preserve the possibility of becoming MVP’s themselves and for their family and friends. This is the American Dream, and it remains quite real.

And yet, some elites in the Media and the Academy don’t believe business involves similar levels of persistent displays of talent. Of course, anyone who’s worked in business or commerce for long periods knows they’re wrong.

And the American people know they’re wrong, too, because they work in those teams all the time.

In fact, we all have very limited time to make serious value-added impact on those around us.

A important observation: The impressive gains Dr. Picketty presents for the top American 10% since 1980 places that group back where it was during the approximate period, 1910 – 1940, as shown in the same Figure 8.5.

While causation’s notoriously hard to pin down in macro-economics, the top wealthiest 10%’s share of total American wealth went down in Piketty’s graphs (very broadly speaking between 1940 and 1980) during World War II and stayed down during the Korean and Vietnam Wars due to those wars, very high marginal American tax rates, extraordinary government regulation, the growth of the modern Welfare State, and other identifiable factors.

The top 10%’s share went down and it didn’t increase much for 40 years, and the rest’s share didn’t improve much either on the basis of dollar value. (Of course, money’s one thing and quality of life quite another. Economists commonly say that the poor in America today live better than kings of old, which is certainly correct.)

We know individuals and families move in and out of Picketty’s top statistical groups with surprising frequency, so we’re never talking about the same people when looking at graphs over long periods of time. One finds that the rich really do earn what they make due to gifted first generational entrepreneurship, generally through legal means. Everyone benefits from this.

And, of course, the wealth doesn’t just sit there in cash, but is almost always working as investment for everyone – customers, workers/employees, management, suppliers, government, and shareholders – and to a great extent in that logical order. (Again, these groups are often called “stakeholders.”)

And almost inevitably, subsequent wealthy generations divide up and squander their wealth not possessing the same entrepreneurial skills or experiencing the same fortunate circumstances. (Again, making money is tough.)

But the people and government benefit at every stage as human and financial capital freely moves to the highest uses, as defined freely on a basis by stakeholders.

If you get behind the figures, you find that what’s happened in the 21st century in America is the middle income groups have moved up in income creating a slight barbell effect in the diagrams, and the poor have benefited from far better buying power, living conditions, and welfare income (see statistics below). While the definition of being poor in America has averaged up, so has relative income in recent years due, again, to market factors.

It’s fair to say that the poor in 2020 is literally nothing like it was a hundred years ago, of which all of America – and, indeed, the world – is well aware.

That’s why people in other countries are breaking down America’s doors to come here.

As you’ll see if you review Dr. McCloskey’s interview (scroll down to the bottom and you’ll see her Full Interview; then scroll over the clips and you’ll see the title of each one), she’s the ultimate eternal optimist, and she might just be right!

As Deirdre says over and over, her primary goal is to help the poor, and, as we highlighted recently, America and the world are actually on track to eliminate poverty in the 21st century.

Think about that. Such would have been considered lunacy in the 1970’s.

As you would guess, Dr. McCloskey believes the key is free economies that help the poor help themselves; in other words, a hand up rather than a handout, so to speak. Long term, self-sufficiency is the only way human beings can build pride in themselves and their families and communities, which sustains them materially and spiritually.

It’s happiness through earned success that we’ve mentioned before.

Dr. McCloskey’s most recent book (which we’ll review later in the year), Why Liberalism Works: How True Liberal Values Produce a Freer, More Equal, Prosperous World for All (2019) makes an excellent case, indeed, on most points.

Give it a shot if you’re ever drawn to engaging economic analysis with quite a distinctive humanist flair.

So, here’s the chart promised up top of this post and its thesis statement (derived from the Wall Street Journal article below): It’s said in the media that, at the very least, the richest in America are 60 times more wealthy than the poorest in America, when the actual difference is only 3.8 times:

Average 2017 American Income by Quintiles (the point that divides a sample into 20% blocks):

Now, read the article below skipping down a bit to begin thinking about this issue, making observations, and drawing any conclusions for yourself.

(One question we should all ask: Why work at all?)

But now to answer definitively the key question posed in the title of this post (drum roll please), “Do figures lie?”

The answer is “Hell no, figures don’t lie, liars figure.”

And, furthermore, for that reason we here at Praxis Circle would suggest never leaving David and Venus together alone & unsupervised in a dimly lit museum, not for one stinkin’, silly second, not one.

We aren’t stupid, and they’re most definitely up to something.