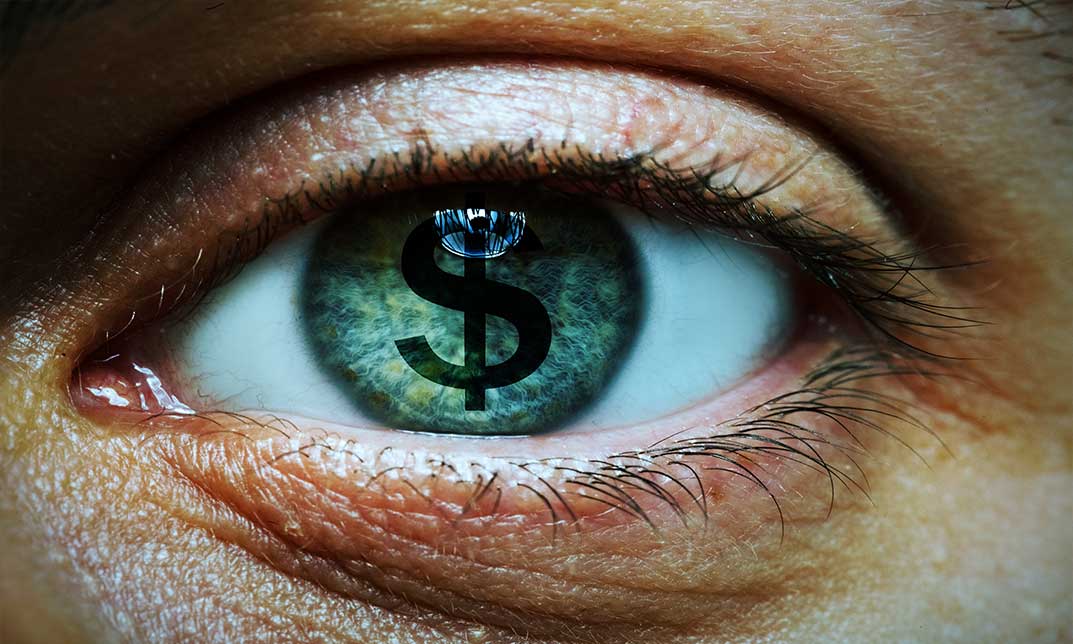 In our Circling blog dated August 9, we discussed a well-known Green-Eyed Monster that’s plagued humanity since inception (e.g., Adam and Eve envying God and eating the “apple,” Cain envying Abel and killing him, and so on and so forth through Revelations).

Let’s call these twin monsters “brothers,” like Daryl and his other brother Daryl, referring to the old Newhart TV show (1972 – 1978). (It’s scary to the authors here how many of you weren’t even born in 1978.)

Not that women aren’t just as envious and greedy as men.

To refer again to an early instance, recall the scene from mythical Greek antiquity where an apple, yet again, gets tossed into a room of three spectacularly beautiful women addressed to “To the Fairest” and see what happens.

The Trojan War, of course; that’s what.

So, our case rests here early on concerning greed and envy being universal human traits.

Probably the most famous Hollywood statement we can think of about greed was made by Gordon Gekko in the 1987 movie, Wall Street: “Greed is good:” It’s always fun to watch this short speech, which is still frequently referred to today. The Media and the Academy have successfully made “Greed is Good” into American Capitalism’s Universal Creed.

Those who were on or close to Wall Street in the 1980’s remember that decade as an extremely aggressive and heady period in finance, and it’s one that’s unlikely to be repeated anytime soon.

However, it’s ludicrous to think that Americans even on Wall Street ever thought greed was good.

In the free markets, greed can produce motivations that create products and services that serve human needs and buyers well, but such activity is better seen as the unintended consequences of a vice, not as a “public good.”

Greed has never been held up broadly in finance or America as a good. All who make this claim rely on select, anecdotal evidence.

Furthermore, true to its nature as a vice, greed trips up most successful capitalists who stay greedy long enough, and it does significant public damage. Please note perhaps the most feared financier year-after-year in the 1980’s who hosted the famous Predator’s Ball, Michael Milken. In the end, he was fined several hundred million dollars and sentenced to ten years on charges of racketeering and fraud. (Since serving his time, Milken has dedicated much of his life to charity.)

Perhaps the next most famous video clip about greed is the 1979 conversation featured below between free market economist Milton Freidman and Phil Donahue on Donahue, a popular talk show of that era.

Note that Dr. Friedman never says, “Greed is good” or allows Mr. Donahue to tag capitalism with greed. He offers a nuanced answer; please listen to his words carefully. They draw Mr. Donahue in, who is a sincere advocate of the left. Indeed, many leftists admired Dr. Freidman (like Michael Foucault) and studied him thoroughly.

As you know, there are seven traditionally recognized virtues (good) in the West, as well as seven recognized vices (bad).  As two of the seven vices, both envy and greed would never be recognized as good in any legit Western circles, even though fate or luck often rewards human beings when it shouldn’t.

Next, our very own PC Contributor, Anne Bradley (introduced here), offers an excellent and short overview of how virtues and vices can be applied in the free market. Whether you agree with her or not, you will recognize that Anne is extremely skilled at applying Christian thinking to economic issues. (If interested in that subject, take a look at her Full Interview:))

We’ll be introducing our list of new PC Contributors soon, and one of our New Experts believes that after 1800 the West increased its wealth 3000%, largely using the approach that Anne describes. (Hans Rosling illustrates that terrific wealth increase in this famous video.) Indeed, some economists believe we can even eliminate poverty worldwide if we stick to our virtuous freedom guns. Again, we’ll be presenting this fascinating argument to you soon.

At this point, we’re just going to tell it to you straight. We believe if you master our PC videos you will open up a whole world of thinking that’s full of meaning, yet quite simple. Below we present one of these profound videos that we will come back to over and over again. It has so many implications.

Like Anne, we introduced Dr. James Hall last year. His comments below bear directly on what Milton Freidman says about human beings. We’re extremely complex creatures, and Dr. Hall says he just can’t deal with his fellow homo sapiens without striving to understand their true intents and purposes, which are usually many. This insight has a host of key philosophical, theological, and worldview implications.

After watching Dr. Hall’s video above, consider whether Michael Milken’s motivations or intentions were actually greed. Could it have been a power trip or even a sustained desire to create a whole new capital market (high yield or “junk” bonds) or to further “creative destruction” in global business markets that might have been long overdue?

Maybe it was simply prolonged, Orwellian success that became hubris; who knows?

But whatever the case, it’s flat absurd to suggest that “Greed is Good” is American capitalism’s creed.

If you believe that, please call us at Praxis Circle.

We’ve got some gorgeous swampland you can steal for cents on the dollar.