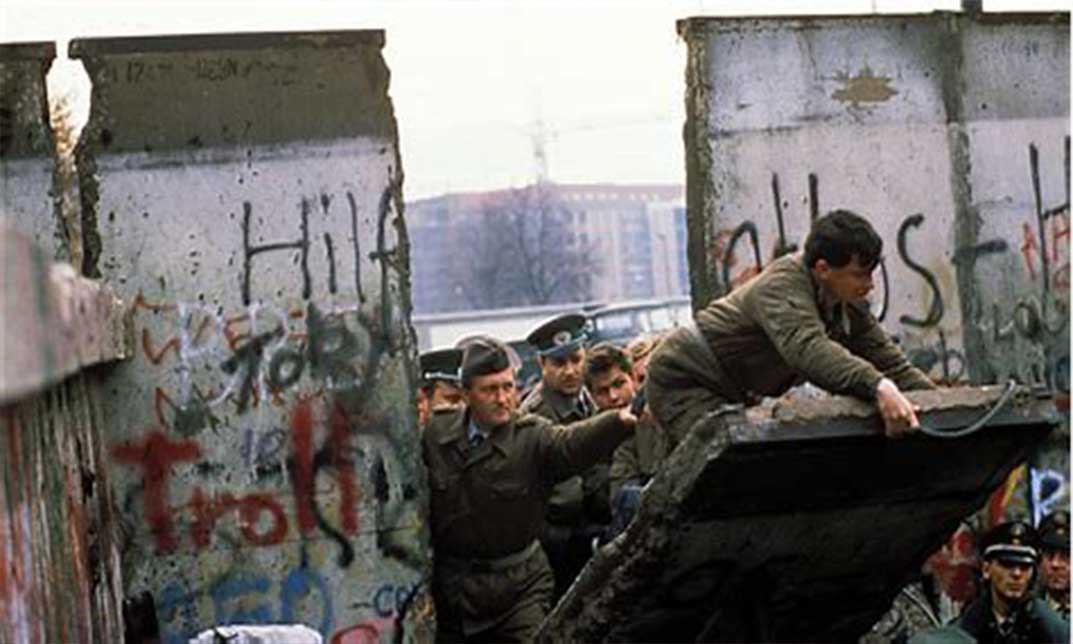 We finish our week-long tribute (see Part I of III and Part II of III ) to 1989’s Fall of the Berlin Wall, thirty years ago ~ today, featuring three “birds of a feather,” all men (two deceased whites and one living African-American) who were delighted – no, ecstatic (or would have been) – at the Wall’s fall and the subsequent destruction of Communism in Eastern Europe and the Soviet Union.

All three, Michael Novak (1933 – 2017), Walter Williams (1936 – ), and James Burnham (1905 – 1987), are great advocates of Western freedom, private enterprise, and limited government. They oppose socialism, which Walter Williams defines as government ownership or control of what’s more typically private production of goods and services, even in today’s Scandinavia or America.

One of the themes we’ll constantly harp on is the importance when dealing with academic, writing, or religious professionals – philosophers, scientists, professors, journalists, writers, and ministers – of how they live their lives. In other words, we should note what they do, even more than what they say.

Why them more than us? Because they get paid largely to think and comment. These professionals play a critical social role and thus bear a heavy burden.

Michael Novak was not well-known to the general public, but he had an immense influence on the world when it mattered. The attached article highlights this. Mr. Novak was an extremely humble man, but at our request, as shown in the video clips below, he did offer some comments about his role in the Wall’s fall.

If you don’t need any more background to today’s Praxis Circle video clips, we encourage you to skip down below to our first video, then the rest. Enjoy!

An important aside: We at Praxis Circle are not trying to hide anything; we want to be transparent. We are dedicated to thinking about worldview.

That’s why, so far, we’ve selected so many Expert Contributors who’ve experienced radical changes in worldview, and changes that go in all worldview directions. You will see this even more with our new Contributors to be introduced in more detail soon.

Some Expert Contributors have thought their way in and out and all the way around every worldview box imaginable. At a minimum, each Expert Contributor has spent enough time thinking about worldview to be articulate about why they are where they are.

Michael Novak and James Burnham are perfect examples, though in these cases they both went from left-to-right, which is part of the definition of “neoconservative.” To our knowledge, Walter Williams has always been attracted to the importance of the private sector, which originated from his family background and childhood in Philadelphia’s segregated projects.

In any case, we think James Burnham’s classic Suicide of the West (1964) is perfect for generating worldview thinking.

The book’s purpose was to outline 19 principles of liberalism (not meaning then exactly what it does today), contrast them with the principles of conservatism (same comment), and explain why liberalism was taking the West over a cliff. (Please note that all of the quotes we feature around the videos below are taken from that book.) We highly recommend Suicide of the West to anyone left, middle, or right as an entertaining and thought-provoking classic. In fact, its historical context is even more interesting now because it’s quite dated.

As we mentioned in our last post, the Berlin Wall’s fall proved Burnham wrong in the short-term, but the book’s been cited quite effectively in recent books to explain what’s going on in Western society and politics today, to be addressed in these pages soon enough.

In 1964 the Cold War was at a fever pitch just after the McCarthy (or Red) Scare and the Cuban Missile Crisis, the Korean War having been settled a decade prior at the 38th parallel line.  After the Gulf of Tonkin incident, President Johnson’s formal troop commitment turned up the heat in Vietnam. Finally in 1964, America was also experiencing severe political conflict over Civil Rights and its growing Welfare State.

One last thing before getting to today’s Praxis Circle videos: It’s important to say a few more words about James Burnham.

Burnham was one who many from all sides loved to hate, but he was one of the most notable writers of his time. Nearly all recognized him as a heavy-weight intellectual.

Burnham is extremely quotable when it comes to debates between left and right extremes, much like Alexis de Tocqueville is quotable about America in the early 1800’s and about its nature and mission today, or like Friedrich Nietzsche is quotable about just about anything concerning the Classics, Christianity, atheism, postmodernism, or fascism and its many variants.

As mentioned previously, Burnham worked himself from being a Trotsky-loving Communist before WW II, who actually developed a correspondence with the Russian revolutionary himself, to a “card-carrying” conservative and co-founder of the National Review in the mid-fifties. Of course, America was under intense external pressure from Communism then, which made American internal pressures much sharper.

In fact, some observers today think that the Wall’s fall, by taking the pressure off the West, actually opened Pandora’s Box and accentuated the differences between our American political poles. This gives the points Burnham raised in 1964 now that much more explanatory power. Indeed, with circumstances and issues quite different today, it seems both sides have reversed themselves on several critical issues!

Well, we get ahead of ourselves.

In the end, we hope you enjoy these videos and quotes, and that we could all agree the world’s somehow better off since 1989. Either way, we’d make Burnham proud by noting what we’ve learned since 1914 through the social experiment called world history.

Western civilization could not survive as a going concern, as more than a remnant, without the United States. I take it to be too obvious to require discussion that, if the United States collapses or declines to unimportance, the collapse of the other Western nations will not be far behind – if it won’t have occurred beforehand. (Suicide of the West, page 27)

This book is in no way concerned to refute liberalism. The question of truth or falsity of an ideology is in any case of minor importance. Human beings believe an ideology, as a rule, not because they are convinced rationally that it is true but because it satisfies psychological needs and serves or seems to serve, individual or group interests. Still, I do not want to hide my own conviction – nor could I, if I would – that the nineteen constituent beliefs in the liberal list are, so far as they can be judged in terms of truth or falsity, false on the available evidence; and that, though they may not be internally inconsistent, they are pragmatically contradictory in the sense that they lead in practice, and necessarily lead, to results that violate their premises and intensions. (Suicide of the West, page 143)

. . . by all the centuries of Christianity – the body of faith and belief under which the civilization of Europe and the Americas had taken form – and by all other the great world religions, man is a creature by essence limited and bounded, his potential goodness corrupted by a portion of the evil that by his own efforts cannot be overcome . . . (Suicide of the West, page 144)

What Will Cause the West’s Destruction

Liberalism permits Western civilization to be reconciled to dissolution . . . not as a final defeat, but as the transition to a new and higher order in which Mankind as a whole joins in a universal civilization that has risen above the parochial distinctions, divisions and discriminations of the past . . . But of course the final collapse of the West is not yet inevitable; the report of its death would be premature. . . There are a few small signs that liberalism may have already started fading. Perhaps this book is one of them. (Suicide of the West, pages 350 – 351)

Men become willing to endure, sacrifice, and die for God, for family, king, honor, country, from a sense of absolute duty or an exalted vision of the meaning of history . . . And it is precisely these ideas and institutions that liberalism has criticized, attacked, and in part overthrown as superstitious, archaic, reactionary, and irrational. In their place liberalism proposes a set of pale and bloodless abstractions – pale and bloodless for the very reason that they have no roots in the past, in deep feeling and suffering. Except for mercenaries, saints, and neurotics, no one is willing to sacrifice and die for progressive education, medicare, humanity in the abstract, the United Nations, and a ten percent increase in social security payments. (Suicide of the West, page xxxi-xxxii)

In 1987 on his deathbed, James Burnham converted to Catholicism, returning to the faith of his childhood.

As a final note, we’d like to pay special tribute to the Chinese patriot (known as Tank Man) who went “permanently missing” after 1989’s Spring Uprising, just prior to the Berlin Wall’s fall. The photo below was taken on June 5, 1989 during the Communist Party’s brutal crackdown. In the second Praxis Circle video above, Michael Novak gives him credit for influencing Mikhail Gorbachev’s decision to forego violent intervention in Germany when the Iron Curtain met its natural destruction.

Our lives do matter, quite a bit. 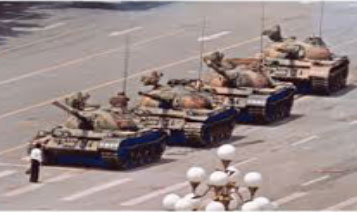 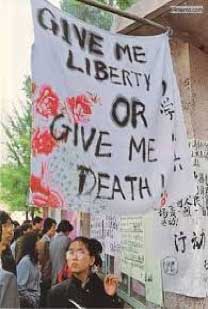