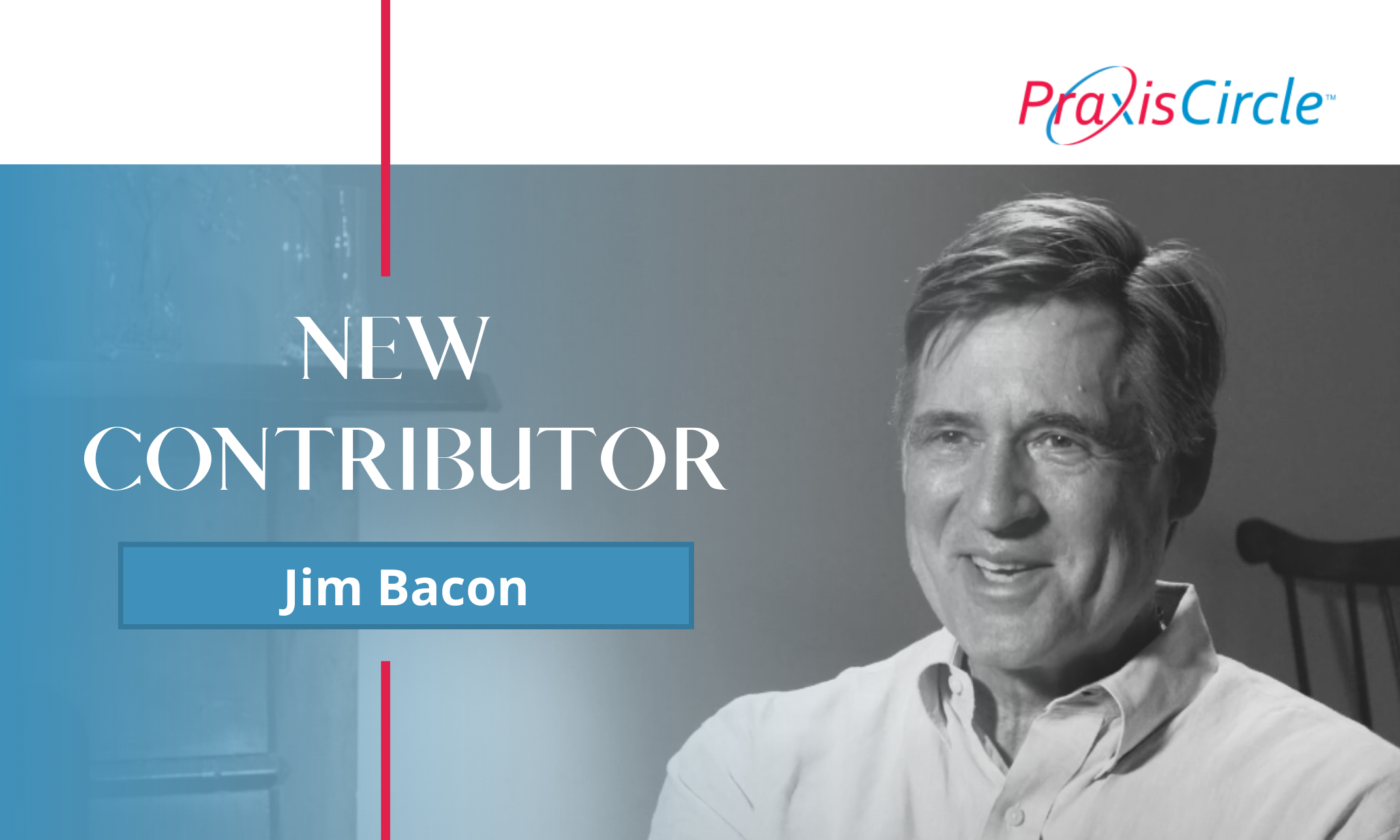 Praxis Circle is happy to welcome as our newest Contributor James A. Bacon, journalist, author, and editor/publisher of the blog Bacon’s Rebellion. We are fortunate to have Jim as a member of our board. Please start the playlist above to watch his full interview.

Jim is a dedicated Virginian. He graduated from the University of Virginia and attained his masters at Johns Hopkins University, both degrees in history. He began his journalism career in southwest Virginia  and ultimately settled in Richmond as editor of Virginia Business magazine, eventually becoming the editor-in-chief as well as its publisher.

Feeling bureaucratically stifled while witnessing the Internet’s explosion of news & opinion, in 2002 Jim started Bacon’s Rebellion (BR) as an email newsletter. It has since developed into a highly-regarded and well-staffed team virtual newspaper. Many use it today as their primary source of state and local news as well as balanced editorial opinion.

Jim and his contributors focus almost solely on Virginia public policy issues and current political, social, and economic events. While the publication initially focused on “good government,” BR now regularly centers squarely on the front lines of state and local culture wars with an eye on D.C.’s ever-increasing influence. Over the course of his career, Jim has watched journalism move from an emphasis on objectivity and accuracy to a current emphasis on “narrative.” This move toward political advocacy prompted him to focus on providing a counterpoint to the leftist narrative, while insisting on fact-based truth in reporting. BR‘s writers take positions on both sides.

Jim’s PC interview covers a wide range of topics: his view of human nature, the type of government it requires, religion/secularism, journalism’s descent, businesses in Virginia, Critical Race Theory, DEI, and perhaps closest to his heart—free speech in higher education. Jim helped form the Alumni Free Speech Alliance (AFSA) with alumni from other schools such as Princeton, Cornell, UVA, W&L, and Davidson, to defend First Amendment rights on campus. The AFSA is growing. Please see our recent post “The Fight for Free Speech” featuring Jim and others interviewed about this effort on national television.

With dense personal experience and education in history, journalism, and all things Virginia, Jim’s readers have learned to rely on his sound, mature coverage and personal judgement. He offers a profound regard for the Constitution and its Bill of Rights—many of the values that have made America a shining light. He wants it to stay that way.

Jim is a genuine patriot with a rebel’s open mind to all.