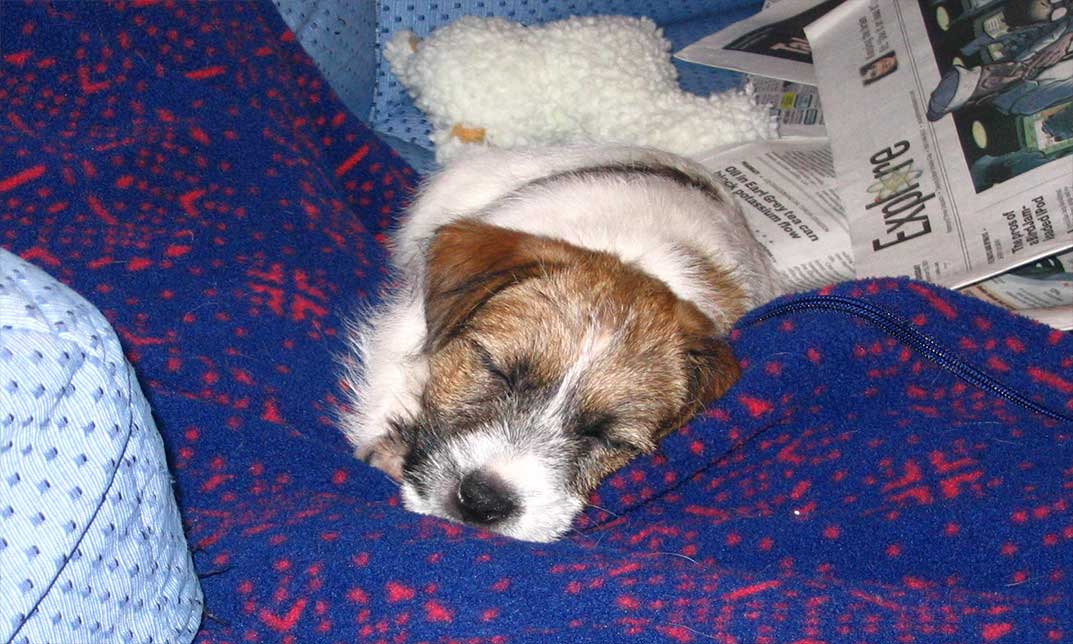 We promised Henry the dog would teach Aristotle’s Theory of Four Causes. Mastering it is essential to understanding Western philosophy, theology, and worldview, whatever yours might be.

Henry will  do this today. Please be warned, however – When Henry walks into the classroom, students straighten with eyes to the front, the Philosopher’s arrows fly, “causation happens.”

Henry means “Home Ruler” in England. That’s why so many British kings loved the name; eight total British kings were named Henry, but there have been many all over Europe. Like our dog Henry I, the first English King Henry was modest, though the son of William the Conqueror. He was extremely intelligent. As you know, the British royal modesty and sense of decorum wore off by Henry VIII.

Here’s our Henry’s royal puppy portrait. Pretty regal for a newborn. No?

Like other kings, Henry likes to win; he likes to dominate. He gets into the power thing every now and then for a little guy, and he’s good at it.

As a grown up today, he likes men’s big money sports the best. He enjoys retrieving golf balls, hunting & chasing rabbits, geese, and deer, and yachting on his 23-footer.

When it comes to the Atlantic Coast Conference, while a loyal fan, he will play the field based on the odds. In football, in recent years, he’s been going with Clemson University. To Henry, Clemson Tigers are real people who have their priorities straight. Henry’s an aristocratic populist, you might say. Tiger Nation medicine is strong, Henry says.

When it comes to the playground, however, Henry moves freely between the Cavaliers and the Tar Heels. In Henry’s Hood, Henry dominates backyard ball.

When he wins and pops the leather ball, he calls it a “teach.” In other words, the losers get schooled.

Henry will do a “teach” on you about the Philosopher. This is how the West knows him.

The lesson for today involves cause and effect. It’s “scientific,” you know. Specifically, you will need to use Aristotle’s four types of causation to explain a mystery he offers now: Why does the door close in the video below?

Got it? Look at the video again. Connect all the dots. As many times as you like.

Ok, now let’s enter Henry’s classroom for the teach. Before getting started, Henry warms up with a few calisthenics, so he doesn’t pull anything. Athletes like Henry can never be too careful.

And like other world-class performers, Henry prefers to do his training in sunny, breezy Southern settings.

Now the time has arrived.

Henry will demonstrate why the door closed. Again, you must decide what causes the door to close – please determine the material, formal, efficient, and final causes.

Again, Aristotle’s four causes are material, formal, efficient, and final. The material cause is that material constituting the cause in question which creates the effect.

The formal cause is the form the material takes in shape and nature.

The final cause is Nature’s big picture purpose for the desired result. The Philosopher believes that all or most objects in the material world have a final cause or purpose of lesser or greater degrees. These purposes fit together to create our world and “natural law.”

You know, the law of the jungle, dog pen, and ACC. What rabbits, geese, and deer – and foxes – have to deal with when it comes to Henry.

The question is – Are the purposes themselves of this world? Are they all of a material nature? Is this world all that is, ever was, or ever will be?

A chair is a classic example of the four causes. A chair’s material cause is wood, nails, saw, and hammer; its formal cause is four legs, a seat, and a back; its efficient cause is the carpenter; and its final cause or purpose is for the Philosopher to sit at the table to string his bow.

The Philosopher’s arrow will hit its mark. This is truth.

A sailing ship is wood, screws, masts, and sails used to form a vessel. The boat designer Magellan builds it to sail around the world.

Now, Henry’s pre-game warm-ups and the lecture are over. It’s time to test your comprehension. Please watch him in the video do his doggie teach. Henry’s pretty excited about his debut, quite frankly.

What are Aristotle’s four reasons for the door closing?

The obvious four answers are: (1) The material cause is Henry himself. What else should we expect from a king?

(2) The formal cause is being a dog. Henry was born and raised in Floyd, Virginia near Christiansburg in the Shenandoah Valley of the Appalachian Mountains. That’s why Henry will shift off Clemson in a heartbeat whenever Virginia Tech gets hot. Henry’s mother and father intended to bring him into the world, and he is fortunate they were so proud of him as a pup.

And, oh yes, Jack Russells are excellent at closing doors.

(3) The efficient cause is his weeks of formal training – you know, the 10,000 hours needed to achieve excellence in the sport of closing a door. Henry knows lots and lots of tricks. He likes to do them and wants to be the best. He likes to be in the ring. This is what Clemson graduates do. They win. He is saving many more stunts for future encores.

Of course, the efficient cause becomes the proximate cause when Henry sees the signal, rises up and places his weight and paws on the door, as he’d done so many times. To Henry, it’s just like being down by two and knocking in three in-a-row with no time left. It becomes routine when under the most immense pressure. This situation glory was premeditated.

But wait. There’s still more today. What about the final cause? What could that be? Or is this all another random, silly doggie stunt? You know how they are. All wag and a bowl full of mush. For the answer, see the “final” video below.

So, was the final cause a doggie treat?

Henry is amused that you could be so shallow, so simple-minded.

We live in a material world. Correct? Or do we? Where is the real pool stick hitting the cue ball putting the eight ball in the side pocket? Who’s behind the pool stick?

Henry and the Philosopher want you to know that the closed door’s final cause isn’t that Henry wants a doggie treat, though he never, ever turns one down as a matter of policy.

No, the final cause is that (4) Henry and Aristotle want to teach you about the Four Causes. They want you to begin to understand Western worldview from different perspectives.

Where is that cause located? Where did it originate? What about the door, floor, wood, doggie treat, and stretched-out hand? The house itself? How did they get there? The camera?

You get it. Henry is all about America. ??

But did you get the right answer? Is your answer the true final cause? What is final? What is a desired result? Where do such results originate? Does nature have desires or purposes? What is the will? Does cause stop and effect begin? Where exactly? Is it all continuous? Can anything ever intervene? What is that intervening thing? Where does it begin? Is it free? Is it material? What, if not? Do animals or plants have it? Is it cause or correlation? How do we know? No, Henry means, How can we really know?

Has Henry dazzled you? Of course, he has. In an earlier post Dr. John Lennox explained (see middle of linked post) how this is central to worldview. Praxis Circle and Henry will come back to the Philosopher many times.

So, how about some applause for our Buddy Henry? Let’s give it up!

The classroom bell’s ringing. Henry hopes this was helpful.

Henry thanks you, too, from the bottom of his heart. Why? The students always school the teacher. Who’s zoomin’ who? has been the big theme recently. He knows you make him better. (See the other TIGERS, LSU, and Joe Burrow this year. Team integrity getting excellent results. Team is plural, too.)

Besides, Henry loves all his people.

Teach over and class dismissed.