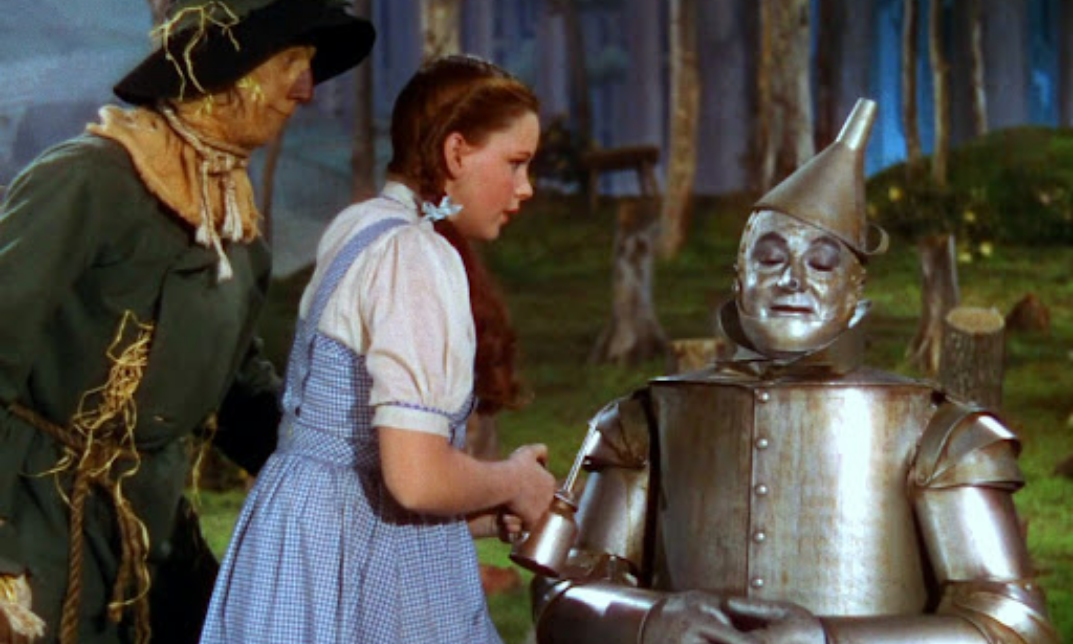 This is a continuation of our Road to Reason series: a collection of blog posts dedicated to exploring the role of reason within some of the today’s dominant global worldviews. Here are our earlier posts in the Series (Introduction, I, and II):

At top is our short, featured clip (2:42) from the Wizard of Oz that will help us go “Beyond Reason” today. But we are begging you to watch the longer version (5:00) linked here because it’s a near perfect form of American movie craft, including the Tin Man’s simple song and dance – but near perfect movie craft is true of the entire movie.

It will make you happy; we all feel like the Tin Man at various critical points in our life.

To this point in our Road to Reason Series we have outlined the key elements of Western reason (Introduction, I, and II) and elaborated on a key version of the Law of Non-Contradiction in a separate post, entitled Self-Referential Contradictions. (For some reason, the author there felt the need to “be the ball,” as they say in sporting literature and movies emphasizing mindfulness. Embarrassing, yes, but there you have it. PC will always be straight with you, our viewers.)

Having offered our introduction to the basics of Western reason, today we will go to the exact opposite side of the spectrum: We will go to a more Eastern view of reason that attempts to go beyond reason, emphasizing the unknown, the supremacy of emotions and feelings, the limitations of human reason to the point of even worshipping paradox, the claim that this world is illusion, the non-existence of self, and the utter transcendence, if not unapproachability, of God or Gods.

The Scarecrow as our metaphor has represented Western reason, and we are using the Tin Man here to represent the more Eastern view that the heart is supreme and beyond reason. Where reasons generally follow emotions to justify them, and where we must find our heart and lose ourselves entirely in this world to join God, who is in us, all around us, and everywhere, yet often presented as wholly unknowable.

(In fact, we don’t think the Tin Man actually represents this view in the movie. Dorothy, the Scarecrow, the Tin Man, the Lion, and the rest of the characters, instead, are rather excellent representations of the central Western Christian/humanist worldview.

A woman with an apple in her hand finding a heartless man in the woods? Hello!)

Yes, we are all limited in going outside our own worldviews, but we can and must do the best we can in our globalized world. To introduce the Eastern way of thinking (if such a thing can be represented to exist), we think there is no better person than Dr. Jay Ford. We hope you will enjoy this attempt to go beyond Western reason, and we want to highlight that any comments beyond Jay’s videos are ours alone.

(One last qualifier: Of course, there are almost countless worldviews in the East (India, Asia, etc.) and across the globe. It’s a gross generalization to try to go beyond Western reason in one post, we recognize. Clearly, few can understand them all, though we try. In any case, our main mission is to “keep it in the I” and to assist we Americans in getting our own extremely messy worldview house in order; indeed, we will return to this little house of horrors in Series IV, V, and VI.)

So, take it from the Tin Man, the best way to go beyond reason is to have a heart!

Of course, in the West, we’re often taught the best way to show love, caring, emotions, and feelings is to emphasize selflessness. Self-giving love is the Christian way. Has anyone ever told you to “get over yourself?”

Odds are you were focusing on the immediate situation at hand, neglecting to consider anything beyond your own selfish interests. In perhaps more sensitive and refined terms, Eastern religions (primary Hinduism and Buddhism) tell us to do exactly that: go beyond. Go beyond yourself, go beyond immediate reality, go beyond rationality all together.

Praxis Circle Contributor Jay Ford, an expert in East Asian religions, former Chair of the Department of Religious Studies at Wake Forest University, and author of “The Divine Quest, East and West: a Comparative Study of Ultimate Realities”, explains what it means to go beyond:

When Jay left America for a year to travel in the East as a young business man, he found many Asian friends who didn’t think anything like we do here. According to Jay, as he learned from some of these Easterners, every human’s “divine quest” is “to get in touch with something of meaning and value that transcends our everyday profane realm.” As he explains, this idea is not limited to Eastern thought: Whether it be God, the Tao, Nirvana, Brahman, or any other concept of Ultimate Reality in religious traditions, we as human beings are (and should!) be striving for the Divine beyond that which is our immediate reality.

Where Eastern religions and Classical Judeo-Christian thought begin to diverge, however, is the idea that this concept of the divine is completely beyond language and concepts—it is simply impossible to absolutize any truth claims about Ultimate Reality itself. To be clear, this is not denying the usefulness of truth claims in our current reality, but instead the impossibility of using human rationality to get us beyond that reality into Ultimate Truth.

In Jay’s book “The Divine Quest,” he explains this concept more fully:

Perhaps it is an ill-fitting analogy, but this distinction between ultimate and conventional truth always brings to mind for me the disparity between the Newtonian model of the universe, and contemporary life is deeply indebted to discoveries it had yielded. To put it plainly, it works. However, the discoveries of quantum physics over the last half of the twentieth century undermine many basic assumptions of the Newtonian model. The Newtonian atomistic view has not surrendered to waves, particles, energy, and strings. Even time and space, Einstein showed, are relative measures. Conventionally, the Newtonian model is still operative. But it does not accurately represent ultimate reality at the quantum level. So also, the convention truths of Buddhism—the Four Noble Truths, no-self, dependent origination, moral precepts, and so forth—are valid and helpful, even while conceding that they do not capture ultimate truth. Moreover, not all systems of conventional truth are as good as all others. For example, it is possible and even advisable to compare “conventional” systems in terms of the kinds of people and societies they engender. This affirmation of conventional truth is not relativistic. In the end, however, one cannot equate a conventional truth, based on conditioned language and symbols, with ultimate truth. The latter transcends language altogether.

While many physicists disagree on what quantum physics might mean for Platonic, analytical concepts (we personally find no issue in reconciling the Law of Non-Contradiction and the possibility of varying physics at different levels of reality), what we can glean from this excerpt is that while Eastern thought does not reject objective “conventional,” everyday truths, it does reject the idea that these truths reflect anything substantive about the Divine. Even Eastern traditions are simply grasping for this Ultimate Truth—with the Divine transcending language altogether, our human perceptions seem to only get in the way. This is the Eastern claim.

Judeo-Christian theism on the other hand, acknowledges that while the Divine (God) certainly lies in a level of existence very different from that of our earthly realm, we have been given the proper tools to understand (to the best of our abilities) the spiritual world and what lies beyond this mortal life. From the beginning, language and the ability to reason were bestowed upon humanity (and we will also admit, to our ultimate downfall) for a way in which man and God could commune together—where two distinct realities can meet to reveal Divine Truths.

This is not arrogance—to claim an understanding of reality beyond our own experience—but simply another view on human reasoning and its role in how we interpret the earthly and spiritual realms. Most important, to Christians, it’s not we as humans who get to God by striving via our own selfish efforts, it’s God that comes to us through His Grace and the Holy Trinity. Indeed, as St. Paul wold certainly agree, God makes himself known whenever the heck He wants to whether we want a connection with Ultimate Reality or not. And it often comes in the form of miraculous conceptions, suffering, and opened tombs.

Two other key concepts in Eastern religion that Jay mentions is the doctrine of “no-self” and “dependent origination.” Watch below:

Jay explains while there is a general acceptance of a soul in Hindu tradition, Buddhist tradition adopts the concept of “no-self” which denies an eternal essence. We are not persons with a soul but instead fundamentally interconnected processes that are ever-evolving and dependent on an infinite number of conditions—what he calls “dependent origination.” To clarify, this is not denying the reality of earthly personhood (as other worldviews do, which we will further explore in this series) but instead claims that there is nothing eternally distinct about a person himself. According to Jay, this rids us of an individualistic view of humanity and inherently makes us more compassionate and selfless to others.

However, Jay also claims in the above quote that some conventional systems of truth are better than others—more useful for the people and societies they engender. This begs the question: Does Eastern religion serve us better than other belief systems—or more specifically, better than classical Christianity? For the meantime we’ll leave that up to you, though we must admit that we think God is a very good idea.

Jay explains that the concept of God in classical Judeo-Christian thought is certainly at odds with the Eastern concept of the Divine, and, in his view, even highly problematic considering the world around us:

But if we stay consistent with the idea that reality can’t say anything definitive about Ultimate Reality, how then can we say that the observable world is in contradiction with the Christian idea of an all-powerful and all-knowing God? Wouldn’t that be, in a sense, reifying something through human concepts and reasoning—something antithetical to the Eastern concept of Ultimate Truth?

Can any human being even talk about such ideas or concepts without engaging in reification? One could argue that the entire Eastern point of view is a SRC (Self-Referential Contradiction). No doubt, some Easterners would agree and simply suggest that this is the only way we can converse about the mystery of God and Ultimate Reality.

What we can agree on is this: There is a Divine Reality. Yet how we get to what lies beyond and what that reality is once we get there—that is the question. Can reason really get us there? Nirvana aside for the moment, Eastern tradition says mostly no.

Hence, the journey down the Road to Reason continues. Next time we will return to Western thinking and take on the Wicked Witch (see the short clip below) with everything we have – especially, courage, maybe the key Western virtue beyond wisdom or prudence. (Though each virtue is more or less as important as the other, according to the Philosopher, or it wouldn’t be a CJC – Classical Judeo-Christian – virtue.)

There’s certainly a reason why the Witch of the West always goes after the Scarecrow. He’s what makes human beings different from animals and robots. He will be her downfall, along with heart, courage, and a desire to go home.

BTW, did you notice who got the Tin Man back into operational loving mode in the short clip at the very tippy-top of this page? That’s why all radical Marxists and postmodernists know it’s essential above all else to undermine perhaps the most key pillar of Western civilization – Truth (examined by reason) – so that they can substitute their own.