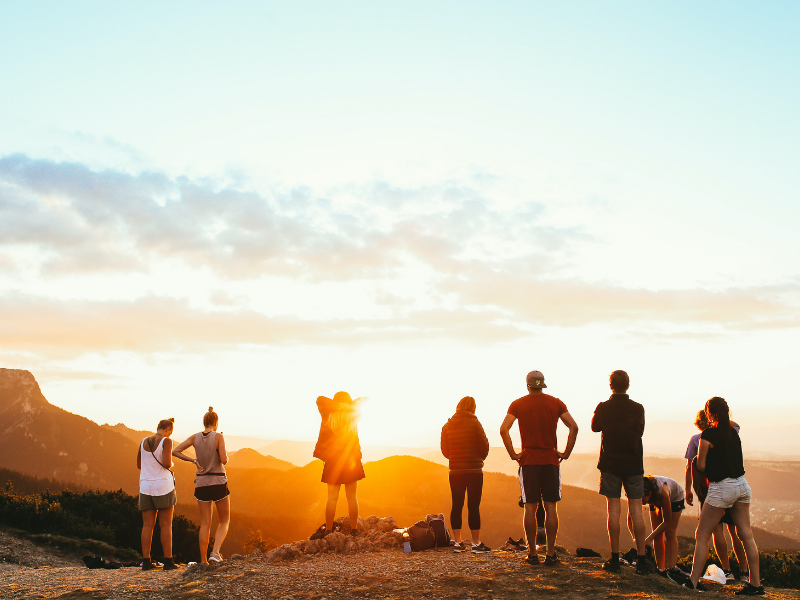 “The purpose of worldview studies is nothing less than to liberate Christianity from its cultural captivity, unleashing its power to transform the world . . . Training young people to develop a Christian mind is no longer an option; it is part of their necessary survival equipment.” (page 17 and 19 of Total Truth: Liberating Christianity from Its Cultural Captivity by Nancy Pearcey, 2008)

Here is introduced a new worldview Circling Series on the concept of truth that will take us through much of the summer. We will provide an overview of Truth and refer you to a number of helpful resources. Of course, we operate primarily from a CJC (Classical Judeo-Christian worldview), believing that “truth is true” and not relative by both definition and in application. Truth is qualified only by various levels of certainty.

For perhaps the next year, our Circling Series (a blogging category) will review in detail each pillar of worldview described in our March 11, 2022 post, entitled Worldview Pillars, where each of our eight metaphysical pillars are described (Truth, God, Miracles/Grace, Space/Time, World, Human Being, Morality, and Governance).

Christians lead the world in worldview analysis because many perceive it as their duty coming out of the Gospels, primarily Matthew 28: 19 and 20, the Great Commission (see last two verses here). In sum, beware of Praxis Circle staff and members bearing gifts!!

While there are many great worldview scholars across the globe, with the recent deaths of James Sire and David Naugle, we see Nancy Pearcey as perhaps the leader in Christian worldview analysis from the standpoint of producing content and analysis that regular people (like us) find useful. Her books on the subject are displayed in the picture below, and we will be relying particularly on her books Total Truth (2008) and Finding Truth (2015) in our Circling Total Truth Series.

However, again, there are many great Christian worldview scholars, and we will take an ecumenical approach to the subject of truth across Protestant and Catholic lines, necessarily stepping outside the predominant, orthodox CJC worldview (that has created the West) into other secular and non-Western spaces. 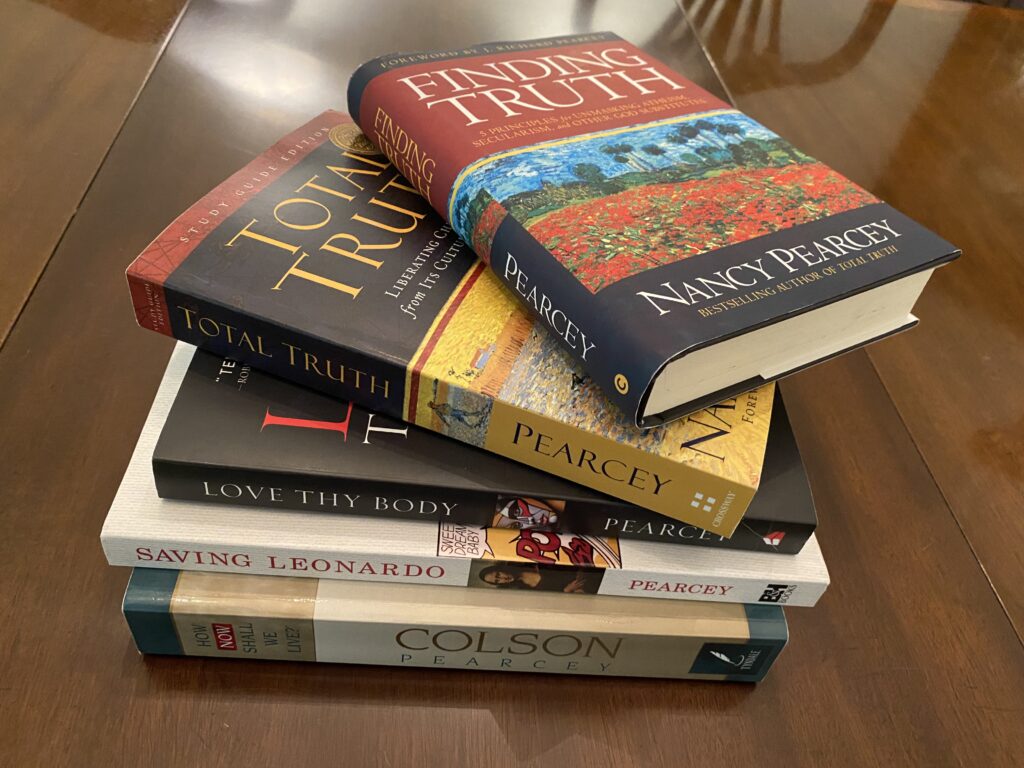 We just finished a three-part Circling Series entitled Renaming Capitalism that was written in the spirit of John Paul II’s call for New Christian Thinking in the 21st Century in his encyclical Centesimus Annus (1991), primarily about democratic capitalism. There we challenged Westerners to start thinking outside-the-box, which demands new theory and behavior, primarily to combat the long simmering but now boiling threat of Cultural Marxist postmodernism known today as Wokeness.

We made a pitch for replacing the word capitalism with the word creastruction, which revolves around the importance of human creativity in our relation to our Creator God (i.e., God, Yahweh, the Lord, etc.). Nancy Pearcey makes this case well in Total Truth:

“We could even say that we are called to continue God’s own creative work . . . our job is to develop the powers and potentials that God originally built into creation . . . our sense of fulfillment depends on engaging the creative, constructive work. The ideal human existence is not eternal leisure or an endless vacation – or even a monastic retreat into prayer and meditation – but creative effort expended for the glory or God and the benefit of others . . . The best way to drive out a bad worldview is by offering a good one, and Christians need to move beyond criticizing culture to creating culture . . . ‘Creativity is the natural result of spirituality.’ . . . Those in relationship with the Creator should be the most creative of all.” (pages 47, 48, and 58, the latter taken from the section entitled “In Love With Creativity,” of Total Truth cited in full at top)

This view is consistent with the outline of the purpose of Christian work in our last post featuring Hugh Whelchel.

Ms. Pearcey’s analysis of the West’s ills presents the primary problem that we’ve gotten wholly off course in believing in, arguing for, seeking, and doing the truth, which had squarely focused Western Civilization until the late 1700’s or 1800’s. Essentially, Christians with the majority worldview have allowed themselves to be painted or argued into a corner, permitting themselves to be dominated, rendering themselves helpless and irrelevant.

Total Truth masterfully explains how we’ve consented to a long series of binaries that make it nearly impossible to argue on the basis of truth to the advantage of those who oppose Christianity and the West (in other words, “the enemies of truth”). A sample of these binaries: religion/science, upper/lower story, modern/postmodern, mind/heart, value/fact, public/private.

Thinking of Christian time and space as creastruction and creation, rather than as the Marxist “capitalism,” could help accomplish this. Such a mental posture would orient us more toward our own beliefs and the good Western world our ancestors created, the one we are continuing and continuously recreating in the margin today.

Such a strategy might also entail leaving words behind here and there, such as “progressive, liberal, conservative (except when addressing the choir – see the video at top, which we love!), Left, Right, etc. Not that we are arguing pure pragmatism or libertarianism. No, not at all. As you will see in the Total Truth Series, truth makes whole all forms of human thinking, whether the loftiest concepts or the most brutal data points. In other words, this is what Jesus of Nazareth known to us as Christ does.

By the way, other Westerners or non-Westerners should not fear New Thinking because the Christian worldview is the sole source of the freedoms of thought, speech, and association that makes their lives as currently lived possible. In attempting to obliterate and replace the pillars of Western civilization with a monstrous government controlling every aspect of our lives, the Radical Left is destroying its own freedom.

Liberty, freedom, the Freedom Principle (virtue is what makes us human, and there is no virtue without freedom), or what we have called the Shane Principle is bedrock to the West. Above all else, society must ensure each person’s potential to realize his or her humanity. To most religious persons, humanity is possible only in relation to God; thus, religious freedom is the First Freedom.

Freedom must have solid foundations in governance or chaos and then serious violence inevitably follows, and sometimes for decades, even centuries.

It can happen again. It might if we stay on our current course in America.

We wish you a very happy Memorial Day Weekend, and want to express a deep appreciation for our American military and police forces, especially those hundreds of thousands of patriots who sacrificed their lives. We owe our freedoms, joys, and lives to them. They are integral to creastruction; indeed, they make it possible. See our board member Anne Bradley’s Memorial Day reflections on freedom, fulfillment, and flourishing here.

Now, if you have any spare time over the weekend, we offer you just a couple of mental exercises that might pull you away from your crossword puzzle, newspaper, jigsaw puzzle, social media, backgammon board, TV, card game, or video game.

Glance through the two excellent articles linked below (the first is an economic report on 2022 and the second an op-ed on stakeholder capitalism), and wherever you see the words “democratic capitalism” or “capitalism,” replace them in your mind with creastruction. It will be easy with democratic capitalism, but more difficult with just capitalism.

The reason is that Americans typically think of capitalism as just our economy, free enterprise, free economy, or private sector, not as current time and space dominated by capitalist oppressors, as Marxists do. When you know that “the economy” is the context of capitalism in either article, use any of those words or phrases that you would be comfortable with, other than the word capitalism.

Democracy is still democracy, republicanism is still that, and economy is still economy. Yet the state of evolved creastruction today in America would be a constitutional democratic-republic, supporting a healthy, family-based private economy, churches, and lots public and private social institutions in between. A three-legged stool. Individuals and families produce a new government if it overreaches, which governments always do because power over the long run always corrupts. History is clear about that and the inevitability of wars, due to human evil.

Creatruction would be a single word for “democratic capitalism,” with capitalism a faux word that goes poof. If you want to add adjectives like “stakeholder” economy or “conscious” economy, you can. But you can see how silly that gets. Americans should ditch related Marxist words like bourgeois, etc., as well. We are not only playing a language game, but a thought and action game. And we have no choice but to play and to rely on truth.

As philosophers like to say, “The only certainty: The game is played.”

The State of Democratic Capitalism: 2022

The ‘Stakeholder Capitalism’ War on the Enlightenment

What do you observe from doing this? Where do problems rise? How to deal with them?

At a minimum, you are practicing staying strictly within your CJC worldview and not wandering into a false Marxist or postmodernist worldview. You will be starting to train yourself in truth, practicing to signal to those you meet in the public square that you are bringing your Christianity with you, are not apologizing for the West one bit anymore, and are ready to begin restoring America and the West to a better course more consistent with your worldview.

You know, the one that produced the true, good, and beautiful social structure and morality that establishes our positive freedom.

Similarly, consider Sam Harris’ and Daniel Dennett’s materialist worldviews that dictate that the human self, consciousness, and free will are illusions, or perhaps better yet, a “trick.” These men are admired scientists and have much to contribute to human knowledge. But if you actually read what they write or listen to what they say on certain topics, it’s a laugher.

Clearly, the self, consciousness, and free will are true, and science has very little to say about them after all these years. Scientism’s pursuit of reductionism always dead-ends into utter nonsense.

In contrast, the videos below, the last two being Praxis Circle videos, will point you in the right direction.

Finally, if you really don’t have anything to do this weekend, then you can skim over this post that touches on how science is actually proving God. Now, in addition to the Army, Navy, Marines, Coast Guard, Air Force, State Police, and other First Responders, that’s what I’m talking about. (With prayers for the families and victims in Uvalde, Texas.)