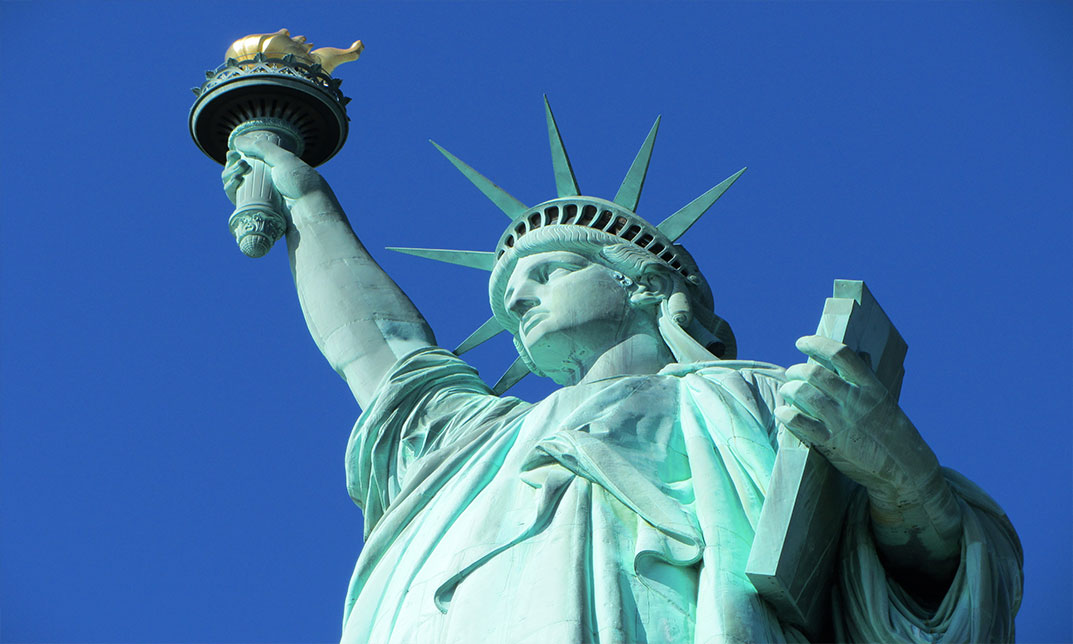 In our last post, we featured Michael Novak (1933 – 2017) talking about whether nature is more about equality or inequality.

In this post, we highlight another key global point also with reference to Mr. Novak: That whenever examining the thought of great thinkers of the past, whatever the type (academic to businessperson to politician to clergyman to soldier to Mom or Dad or to friend or foe – whomever), always take a close look at how they actually lived their lives in relation to their thinking and what actually happened in them.

In other words, “if you are going to talk the talk, you have to walk the walk.” This is what life praxis is all about, and we’ll be coming back to this point over and over again in our worldview discussions in the future.

To get back to Mr. Novak, whether one agreed or disagreed with him, most who knew him had great respect for how he lived his life and who he became.

Please note the featured articles below from the Wall Street Journal that appeared in 2017 the day after he died. 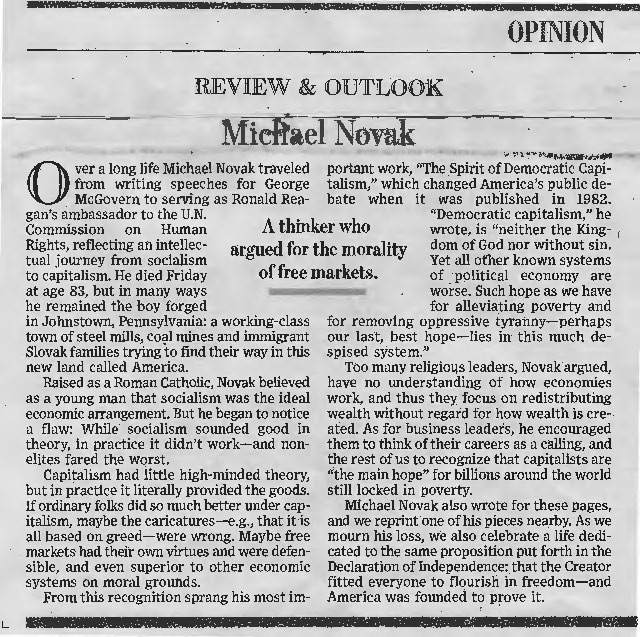 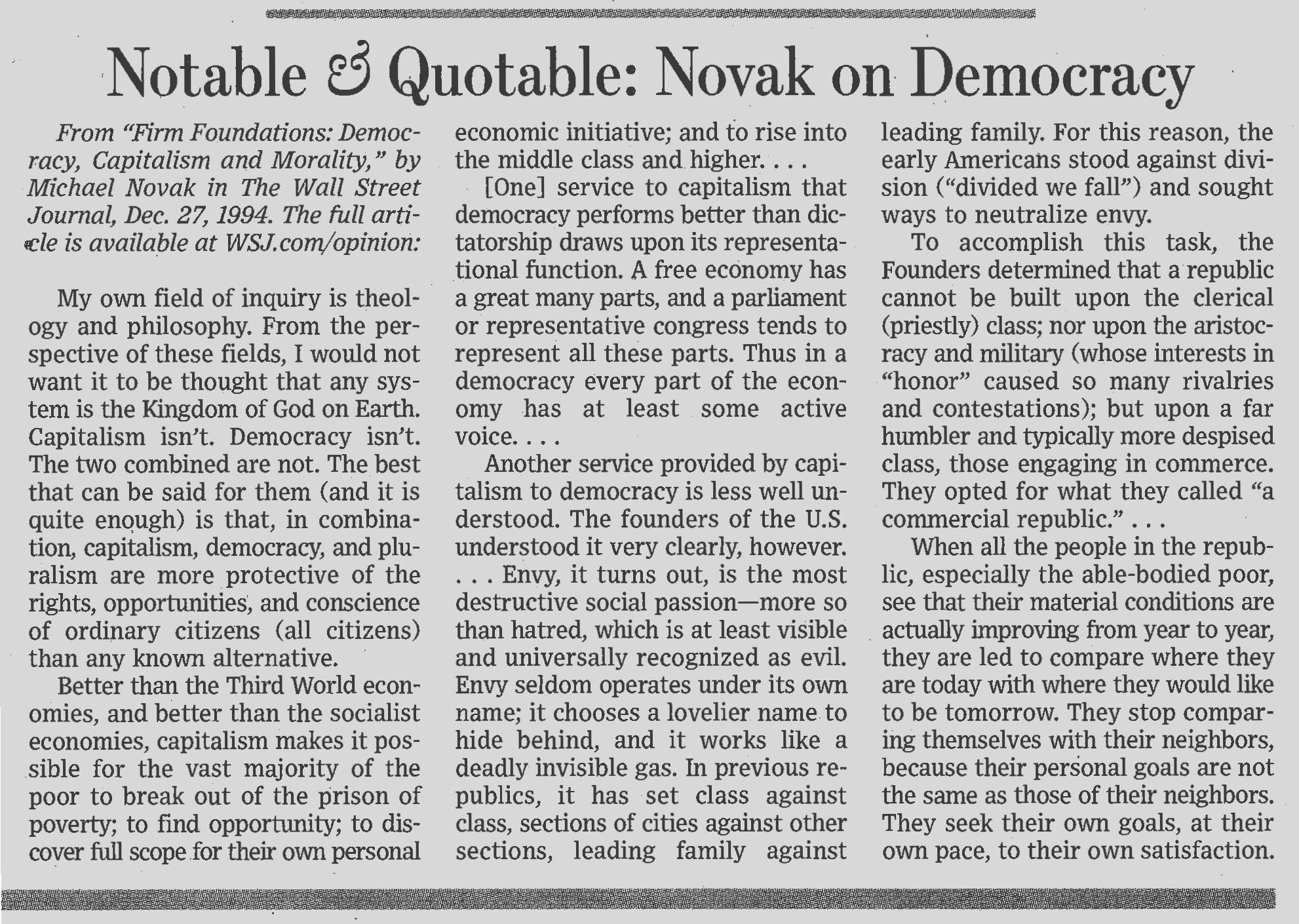 Not many have received such immediate recognition – whether U.S. presidents or popes.

Praxis Circle is proud to have spent almost a full day with Mr. Novak in Washington interviewing him, and we are reasonably certain the interview you see on the Praxis Circle website (at the bottom of the linked page) was one of the last ones of his life.

In sum, we were drawn to Mr. Novak because of the worldview he presented concerning the American political, economic, and cultural systems as described in his beautifully simple book, The Spirit of Democratic Capitalism (1982).

So, a very brief and highly selective summary of Mr. Novak’s life is in order to begin a comparison of thought-to-action, as suggested above:

Mr. Novak was born in Johnstown, PA, where the terrible, historic flood occurred in 1889, up river from Pittsburgh, into a Catholic blue-collar family working in and around the heart of the steel industry. His grandparents had immigrated from Slovakia in the early 1900’s. His family was familiar with poverty in their community, had strong union ties, and had direct experience with the “robber barons” of old.

Tragic floods continued in blossoming Johnstown into the 1930’s (population approximately 60,000) and beyond, and Mr. Novak remarked, “Just growing up in that town taught me about the nothingness that underlies all things, the immensity of human suffering, and the need to dig deep for the steady will to create anew.” (pp. 11-12, see book reference at the bottom of the post).

Mr. Novak was clearly a brilliant student and rose to the top quickly, among the first in his family to do so, getting his master’s in history and philosophy at Harvard.

Mr. Novak’s family was strongly Democrat, and he had the distinction of having created Senator Kennedy’s “New Frontier” presidential campaign slogan at age 27 in 1960; later in the 60’s and 70’s, he influenced the presidential campaigns of Robert Kennedy, Eugene McCarthy, and George McGovern as a strategist and speech writer.  In addition, he was present for the momentous Second Vatican Council in Rome in 1963, having left pursuit of a doctorate at Harvard to become a writer.

Nonetheless, he became a professor at Stanford University and gradually began a movement to the right due to the Democrat party’s continued movement to the left, increasing social violence, unintended consequences of the welfare system, and maturing views of Marxism, communism, socialism, and liberation theology, coupled with an increased understanding of the underlying bases of Western and American society, as presented in The Spirit of Democratic Capitalism.

As he says in the video above, he wrote the book to explain to his friends, many being Marxists, basically what made America tick – knowing that all good Marxists, in particular, absolutely crave “big picture” worldview explanations for the way things are and ought to be.

Mr. Novak married the love of his life, Karen Laub, a painter, sculptor, and writer, in 1963 and was the father of three over the course of their 46-year marriage. (She died of cancer in 2009.)

Ultimately, he found his professional calling as Chair of Religion, Philosophy, and Public Policy at the American Enterprise Institute in Washington, DC, where he remained for 32 years, having served professorships at Harvard, Stanford, State University of New York, Syracuse, and Notre Dame.

He was extremely influential in intellectual circles of national politics, especially during and after the Reagan years, serving on the board of Radio Free Europe. He made a large contribution to the Fall of the Berlin Wall, and during the papacy of John Paul II, he influenced the pope significantly as he presented his own vision of what free Christian societies should strive for in the 21st century. Both men were from Eastern Europe – Slovakia and Poland – and both reached similar conclusions about the political economy, but through rather different pathways.

It seems to us that Mr. Novak’s worldview shifted somewhat as his own personal journey clarified his thinking as a Christian and as he observed how Christian principles might best be implemented, to achieve optimal results for individuals, families, and communities.

No doubt, Mr. Novak was an American patriot, but one who always held America accountable with pragmatism and common sense, which he must have received in large doses during his childhood in Western Pennsylvania.

Next time with Mr. Novak, we’ll begin brief thought experiment with another Praxis Circle video of him that will help take us through the rest of this glorious month of August and get us ready for more hardcore worldview examination this fall.

“In heavy seas, to stay on course it is indispensable to lean hard left at times, then hard right. The important thing is to have the courage to follow your intellect. Wherever the evidence leads. To the left or to the right. ‘The first moral obligation is to think clearly.’” (p. xx)

–Writing from Left to Right (2013) by Michael Novak