Articles on exploring and building worldviews
Blog

Circling | Worldview
Why is Worldview Study Controversial? Part I of II 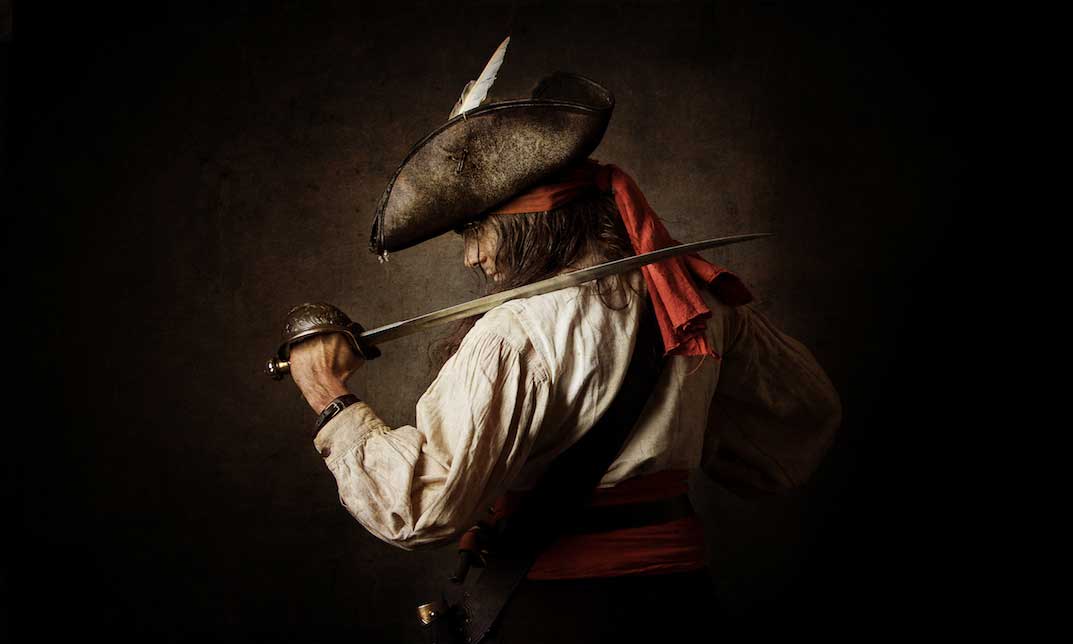 In our last Circling post, we noted at the very end that, if all else has failed, we’ll hook you on worldview study because “everybody loves a pirate.” (We hope you had a Happy Halloween.)

Come to think of it, today’s Election Day. Talk about scary.

The primary point here is that you’re going to have to be controversial and think outside the box if you want to get on with worldview study. Engaging in “worldview think” is always a double-edged cutlass with hero-to-goat potential, depending on one’s point of view.

But let’s not forget women.

When captured in Jamaica in 1720 they were spared due to being pregnant, and, before Anne’s pirate boyfriend, John “Calico Jack” Rackham, was executed by hanging, Anne lamented to him, the father of her soon-to-be child, something like: “Had you fought like a man, you wouldn’t be hang’d like a dog.”

And what about the fictional varieties, Captain Jack Sparrow and Captain Hook, along with lovable wannabees like Dr. Evil? (Dr. Evil not evil enough?)

Indeed, as long as enough time has passed and they aren’t pillaging you and us anymore, pirates are easy to love.

But who needs pirates today, with all the new ways to get fleeced?

Which brings us to the above video.

Walter Williams, featured in our Praxis Circle Profile above (located on our website’s Homepage with several other Profiles), is a nationally-known, syndicated, and popular free market economist, a Professor of Economics at George Mason University. He specializes in thinking reasonably “outside the box” of what’s generally accepted inside the boxed halls of today’s American Academy, and he will win many of you over with his charm, good humor, and razor-sharp insights.

(BTW, Praxis Circle Profiles are approximately 4 minute overviews that introduce our Expert Contributors to be featured on our Homepage for a spell with permanent residence on each Personal Page.)

We begin this post about worldview controversy with a video that could be quite irritating to some because it’s important to be objective and thick-skinned in examining your own worldview and those of others that clash, and we think that Dr. William’s statement in the video, “What the government does is, it engages in legalized theft,” could do the trick (for those who prefer a large State).

Oh, my goodness, how could a Bonnie and Clyde government possibly be true? Our government stealing from us?

Even the American Founders didn’t object, as such, to taxation. Wasn’t it “taxation without representation” that was the Founders’ bugaboo to-die-for?

Aren’t taxes necessary to have any government at all?

Of course, they are. There’s no free lunch, and government certainly isn’t a charitable organization.

Actually, Dr. Williams has a coherent worldview that makes quite a bit of sense of his “legalized theft” comment.

We suggest that you become a Praxis Circle Member (free) and pull up his Full Interview on his Personal Page (only Members have the Full Interview) and hear him out, particularly videos WW-23 to WW-26, and paying special attention to WW-30.

With that in mind, we will be coming back to Dr. Williams and his worldview in 2019 in an attempt to define it more fully, along with the worldviews of other economists who completely disagree with Dr. William’s approach.

Over the long haul, you decide who’s closest, as applicable, to your own worldview and where to go with it.

But we’ll submit now that Dr. William’s views are quite similar to that of America’s Founders (who are somehow now becoming cool again, even in University sectors) and even similar to Frederick Douglass’ view, Mr. Douglass having been quoted in our last post. There are good arguments that the State should keep taxation to a minimum, as well as good arguments to increase it.

What one’s goals are for individuals, society, and the State – along with what actually works (praxis) – should determine where you end up – arguably a function of your worldview.

As Dorothy says in Oz, “If you don’t know where you’re going, any road will take you there.”

In any case, we believe that Dr. Williams understands his view to be true and good – not false and bad – given his decades of experience in economics. Of course, Praxis Circle will always make this assumption when it comes to our brave, smart, articulate, and caring Contributors.

In outlining why studying worldview is controversial in this and the next post, we begin below with four general, fundamental reasons, and finish with nine more in the next post, which are elaborations on these four:

1. Worldview study is a futile and stupid gesture.

Speaking of pirates, it shouldn’t be necessary to remind our Boomer readers of the great latter-day “Liberty or Death” speech given by the pirate who hatched through the smoke with cutlass drawn from his Birthday Cake Mobile, revealing the Delta House’s Deathmobile to university and town dignitaries.

Claim #1 here suggests that studying worldview will do about as much good for America now as the homecoming parade down Main Street does for Faber College. Meetings, “conversations,” conferences, and conventions be damned.

To finish on this threshold point, only two further comments are in order.

First, worldview study today in America could be futile and stupid because of the perceived nature of relations in America involving increasing tribalism with no end in sight.

More specifically, the red and blue political camps are segregating themselves geographically and physically, even in the same local communities: where they live, how they live, what they do for a living, and what they do with any spare time. It’s not class warfare that’s killing us, necessarily, its lifestyle and professional warfare among those who can afford it.

In other words, human beings seem to be part of nature, and natural selection continues to happen across the board. Birds of a feather stick together, and tribal members actually come to think more alike with the hopes of recruiting more bodies & souls, resulting in growing tribal power. This is all statistical fact in America and particularly noticeable over the last 50 years, when wealth and the lifestyle options increased vastly.

As the world turns. This is what people do. There’s nothing inherently wrong with tribalism in the sense that it’s how human beings have survived.

We suspect that the only solutions to it – when tribalism is a problem – is worldview congruence or human nature change (used to be thought impossible by most, but now not so by many).

Second, worldview study in America could be stupid and futile because disagreements cannot be resolved as the Founders had hoped by “reflection and choice” (Hamilton in The Federalist Papers) because truly different worldviews do not share mutual standards, it’s argued, that can be used to resolve differences, since worldviews supply criteria for judgment only within their worldview. This is a longer way of saying that truth and morality at the end of the day are relative and socially constructed for the purposes of human power.

Yes, these are good reasons to “stop Praxis Circle’s worldview study now,” but we in the halls of Faber, where Knowledge is Good, refuse to believe that Americans and global citizens in general have no standards or are out of hope.

And, furthermore, we will not let you disparage worldview study – unless we deserve it.

Clearly, we’ve worked too hard to get here, and, so, we move on in the Wilderness dreaming of the Promised Land.

At the risk of being inarticulate, but certainly indelicate – a qualifier that applies to each of the four reasons listed here why worldview study is controversial – we offer the following:

2. Worldview study is performed by many bad people.

We will simply concede this one.

Face it. It’s true. And we’re sure that all in the red and blue camps at least agree here, needing only point a finger across the way.

And it’s not just politics. We’ve been over this before in the case of Socrates. In the olden days, We the People called these bad people sophists, and even the best ones like Socrates “got the shaft,” as said in ancient times.

Now, if you want to deny this claim because you’re offended or because you just don’t believe it, we’ll offer you some immediate help.

Summary: What is “bad”? What is “a person”? What is “is”? Worldview’s necessary for survival. It’s not your fault. Not everyone is bad (just some). Prove it. You can’t take a joke. Fine, but we’ll bury you, the messenger.

(To be continued next time and beyond.)

3. Worldview study is not a good activity for a whole host of reasons.

For example, take the next reason:

4. It could make you crazy.

End result of worldview study, they say: All that were givens become uncertain choices of an infinite number or variety with no knowledge of reality in sight.

A “for example” case (and they are legion), concerning claim #4 here: Please see the life of Friedrich Nietzsche. He studied worldview and some would say transformed it, but his life didn’t end well. Completely insane; his last 11 years institutionalized.

In conclusion, before proceeding further with PC and worldview study, we suggest you check immediately with your health care provider to verify that that your plan covers mental health counseling.

You’ll need to be prepared for what others in time will be recommending you for.

Until next week, then, we at Praxis Circle, along with Senator Blutarsky, and Nurse Ratched, as ever, hope you have a nice day . . . and a pleasant, post-Election Day tomorrow.