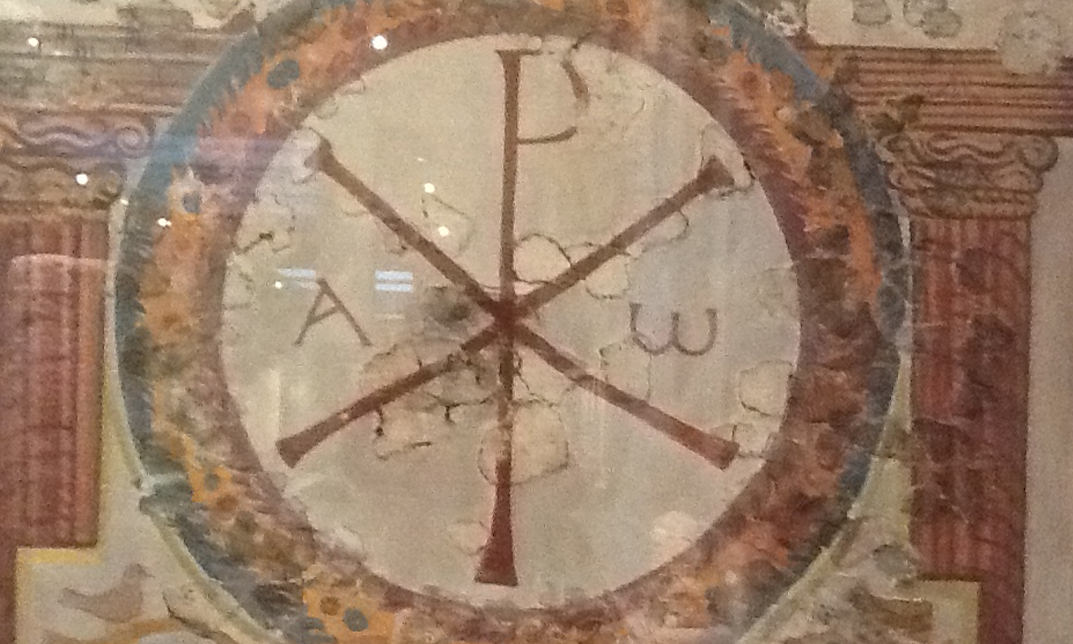 Last week we completed a Q and D series entitled The House on a Rock that featured three books about the importance of Christianity to Western history, worldview, and culture. It included as linked here: Part I, Part II, and Part III. Part I centers on Tom Holland’s recent book, Dominion: How the Christian Revolution Remade the World (2019).

In a subsection entitled Keeping the Faith (pages 127 – 136), Mr. Holland describes the Emperor Constantine’s reunification of the Roman Empire, beginning with the Battle of Milvian Bridge in 312 AD. Before that decisive battle, Constantine had his soldiers paint the Chi Rho sign on their shields (see the picture above), the first two Greek letters of “Christ.”

Mr. Holland then describes how Constantine’s victory resulted in the triumph of the One True God, which in turn resulted in religious freedom for all and in belief becoming more important than ritual. In addition, when an emperor (Constantine) embraced a former criminal (Jesus), the mixture produced a “godly elect” embracing an acknowledged world of sinners, including the emperor himself. Before God, humanity humbled itself.

The world still prospers from these creative, revolutionary ideas.

One of our favorite teachers of Christian Worldview is Timothy Keller of Redeemer Presbyterian Church in New York City. As some of you would agree, when Dr. Keller does a book review, the book is important. Please see his book review of Dominion, now a best-seller, linked immediately below. He mentions a number of themes from our series about Classical Judeo-Christianity (CJC) as the foundation of Western Civilization.

To Dr. Keller, metaphysics matters; it helps define worldview. Some of his points (as expressed or implied):

Early Christendom synthesized the best of Classical “Paganism,” Judaism, and Christian theology and philosophy and then developed it in great detail. Even atheists contributed to the synthesis, but it was guided increasingly by Christianity and Christians as time continued. Mr. Holland’s book and Dr. Keller’s review suggest that perhaps the West has not moved yet beyond CJC’s influence, and they would caution us in doing so.

Keller’s review also suggests that, yes, peaceful protest sometimes works when the powers that be are Christian (see MLK’s Christian America and Gandhi’s British India), but it often does not when they aren’t. Throughout history, for extremely long periods of time exceeding 500+ years in some cases, powerful non-Christians have maintained power by simply enslaving, imprisoning, or murdering the opposition.

Of course, Christians have done that countless times, too; with the difference being there are consequences sooner or later when they violate their own principles. With Biblical principles setting the Christian world’s standards, truth and hypocrisy have tended to destroy the hypocrites.

Our own takeaway from the bullet points listed above? As we mentioned in our House on a Rock series, we believe America needs a whole new approach to teaching Western history. Here’s another recent article on that subject:

What We Really Need Is a 490 B.C. Project by Morgan Hunter.

In Part II we offered comments on two terrific books by David Bentley Hart. In Dr. Hart’s case, we really liked his history of Christianity and his writing about the experience of God in our own lives. He shows how Christianity grew and spread, and how believers today can see God’s truth, goodness, and beauty every moment in every day. We also stressed that we can all be Christians without having to agree on Biblical interpretation and its political implementation. Christianity contains many utterly different worldviews honestly held as true.

Most believe Christianity has values the world needs (please see this article about Catholic social teaching), but large groups disagree completely on what the Bible is telling us about political, economic, and social arrangements. For example, our own Christian worldview is different from Dr. Hart’s. The next link presents an interesting article with its own link (in the first paragraph) to Dr. Hart’s article in The New York Times (11-6-17), where he suggests that the New Testament requires some version of Communism or at least communalism.

Our read is that the Bible, including the New Testament, quite obviously does not condemn wealth per se or even “surplus wealth,” in contrast to Pascal-Emmanuel Gobry’s read, the article’s author, and Dr. Hart’s read. However, Mr. Gobry agrees with us that the Bible portrays wealth both as an opportunity and a potential problem that doesn’t dictate Marxist solutions. All three of us agree that early on Christianity was a counter-empire founded within an empire, and “one founded on charity rather than force.” Obviously, State action is coercive or forceful by nature, and this is true regardless of whether backed by a democratic majority or an absolute ruler. Neither assures justice.

An important difference with Dr. Hart: We do not see how he could write in The New York Times with a  straight face that “not a single verse” in the New Testament “condemns not wealth but its abuse.” Of course, there are many verses in the Bible and New Testament condemning wealth as an idol and its abuse. In addition, there are dozens presenting calling, work, wealth creation, and economics in a favorable light within a world God created that’s presumably good. Genesis charges man to be a good steward of the world in using it for his benefit. Finally, we think the Bible is most concerned with the “poor in spirit,” rather material poverty. Indeed, the first often leads to the second.

In any case, we know the only way to feed the poor long-term is to teach them how to generate and preserve wealth. They tell us they want to feed themselves. Well, that’s exactly the miracle occurring in this country and worldwide right now.

Clearly, America is in a time of crisis. A worst case for America would be COVID, recession, and civil unrest leading the country to split up. We have been concerned about this possibility for years, as the U.S. budget has mushroomed and the nation has grown more divided.  A few are even starting to write about this ugly possibility. It’s a scenario we cannot totally dismiss, and we must do everything we can to avoid it. In sum, Americans need to recognize a solid foundation to agree on. It must start with kind hearts and the rule of law.

We think the way forward is to see American and Western history in its truest positive light. If the West is based on CJC and moving sincerely ahead in that direction, then that’s good enough for then and it’s good enough for now. In any case, it’s probably all we can humanly do. Our emperors are sinners, and our sinners are in the Image of God. One can’t hurry goodness and freedom at the same time. One can’t manufacture character and virtue. We need to forgive each other for the disturbing incidents of history to which almost no one today has any proximate link whatsoever.

America has to deal with its past, but not in the way we seem to be approaching it now – by treating certain human beings as more important than others based on race, gender, or class; by glorifying what are only the normal mistakes all people make and always will. In this we are lapsing badly to the point of the absurd, the ridiculous.

In fact, we can’t think of any principle more un-Christian than raced-based labeling or preference. We rejected this as a nation when the Civil War ended in 1865 with the 13th, 14th, and 15th Amendments, and we codified it in highly needed critical detail with the Civil Rights Act in 1964. There were real, serious issues then.

When will it end? How will we know when America is finally just?

Our real problem is most of America has grown wealthy but also poorer in spirit, as the State has steadily removed incentives to earn dignity through earned success. People only value real, earned success, not handouts or participation certificates. Of course, we all know the differences.

Equality under God and the Law wasn’t hard to understand in the 1960’s, and it isn’t hard to understand now. It is seeing human relations through only a racial lens that cannot leave race alone that’s racist. This was common sense when common sense predominated. Human beings within each race, gender, class, and ethnicity are not the same. No two individuals are the same. Significant differences within these groups are often much greater than the differences between them. We see this everyday.

Let’s treat and judge each person as an equal creature of God. Let’s stop labeling and categorizing people now, forgive those as needed where it’s personal between living individuals, and move forward together. Christianity demands it, and America’s future depends on it, as well.