Today we begin a series of Circling posts that should take a year to complete. Entitled “Worldview Pillars,” this series will offer an overview of the basic elements of our worldviews. “Worldview” goes by a handful of basic definitions, and we’ve reviewed some of these in prior posts. Simply put, your worldview is the lens through which you view the world to operate within it and to answer life’s biggest questions. It’s your philosophy of life, your metaphysical (physical to higher-than-physical, i.e., “meta”) views of the world. To think about this requires reason, which is why last year’s “Road to Reason” Series preceded this one.

To those parents or teachers out there who’ve experienced teenagers: How many times have you heard this slam-dunk justification for the most questionable behavior? “Mom, everybody’s doing it!”

In any case, it’s to our extreme advantage when interacting with others to recognize worldviews as quickly as possible. Doing so will improve your communication and get better results. We believe those who can see issues from a worldview perspective listen harder and strive more to understand others. This improves human relations. Beyond that, worldview thinking furthers rational discussion from a first-person perspective toward others. It more easily steers discussion away from personal and emotional traps that often create antagonism and anger. In sum, worldview understanding fosters a more peaceful public square and more agreeable private relations.

As Sir Roger Scruton says in the video at top, it’s perfectly possible to operate in the world without any knowledge of one’s worldview(s). We imagine chimps & gorillas and our hunter-gatherer ancestors back in the good old days getting along just fine without ever giving worldview a thought. As if we had conversations with them back in 10,000 B.C., our scientific thinking today is certain they did what was “practical and necessary to survive.”

The problem is that as human beings and their civilizations advanced, we know that ideas became as or more important than things. We human beings receive impressions about the physical world through our senses, but then we start forming ideas about them involving both seen and unseen worlds.

We conjure up ideas that seem to have no obvious, everyday place in the world, like God in religion since inception or mathematics in “science” since ancient times. To this day, there’s no agreement whatsoever about what consciousness or ideas are or where they come from. (Trigger warning: What you think here will tell you much about your worldview.)

We will use the worldview scheme below throughout our Pillars series to review worldview’s fundamentals. We constructed it on our own (see the bottom of this post), and you might attempt to do your own chart as we go forward. Ours has three columns and eight rows, but such worldview charts vary widely. We’ve seen as many as eight columns (worldviews) and ten rows (pillars). But the number of pillars could easily be increased well beyond that number because worldview thinking encompasses every fundamental academic and practical mental discipline.

In this section we will comment briefly on the “Three Basic Worldviews” in the title below that are specifically listed in the three column headings (Mindism, Dualism, and Matterism), and then end the post with similarly brief comments on the Eight Worldview Pillars listed down the far left-hand column (Truth, God, Miracles, Space/Time, World, Human Being, Morality, Governance). 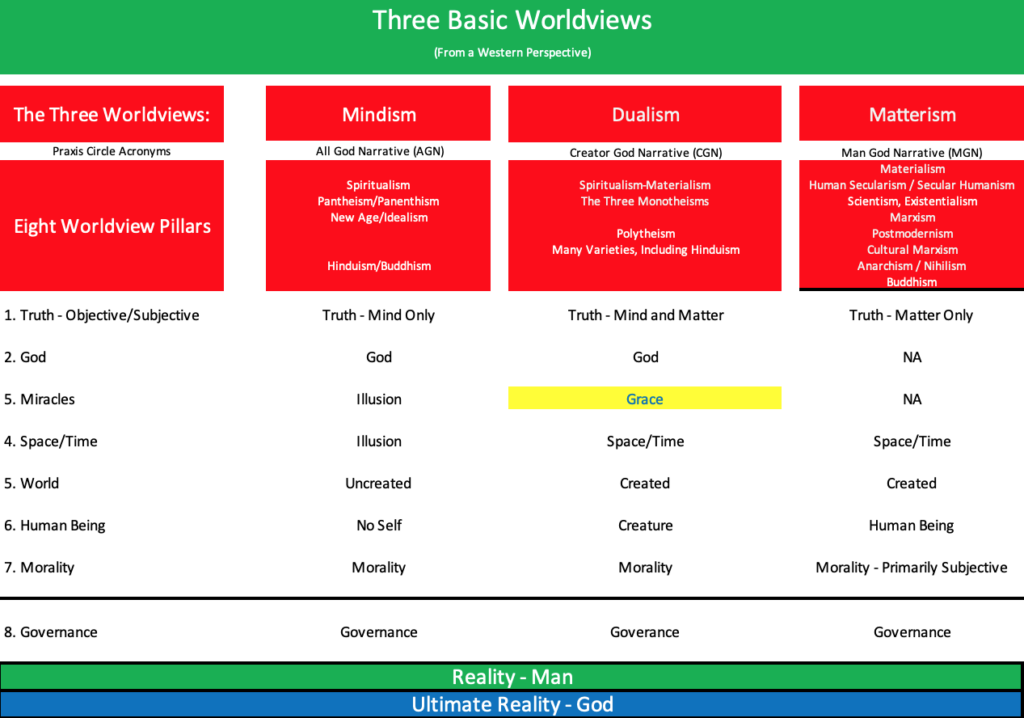 The three basic worldviews outlined above go by several basic names, and we should note the ones selected for use in our chart are less common. The reason we selected them (Mindism, Dualism, and Matterism) is they encompass the greatest consensus today taking a subjective outward approach, rather than starting with claims about the world outside the human being and working inward. These terms are used as chapter headings in a recent, simple, yet creative (and unambitious!) worldview book (177 pages), The Story of Reality: How the World Began, How It Ends, and Everything Important that Happens in Between (2017), by Gregory Koukl with Forward by Nancy Pearcey.

Dualism simply combines these two worldviews into one and recognizes that the unseen or spiritual is just as real as the seen or material. It believes the unseen can reveal itself. Dualism encompasses the three Abrahamic faiths and virtually all worldwide faiths that embrace a supernatural world. We recognize that these worldviews often construct their dualisms in radically different and irreconcilably conflicting ways. We remain agnostic about what the nature of the “spiritual” is, whether in the mind only or out there in another world like heaven or even hell.

In general, dualists believe reality includes at least one supernatural dimension, and that to force materialist thinking is to impose a glass ceiling on human consciousness. In contrast, materialists think spiritualists and dualists are fooling themselves, perhaps engaging in wishful thinking. All such worldviews are held with the best of intentions by most, and all cite reams of evidence and argument in their favor.

As an introduction to next time when we’ll begin to outline the Truth Pillar, we conclude below with Ladelle McWhorter’s excellent overview of Immanuel Kant’s (1724 – 1804)  version of that subject. It’s a good starting point because it places us squarely into our so-called modern view. By the end of our Worldview Pillars series we will have addressed the modern proliferation of ideologies that have produced so many of today’s ism’s. Their number mushroomed in the 1800’s, and they are everywhere now with no end in sight to their development.

How do the concepts of worldview, religion, theology, philosophy, and ideology differ? These are important definitional and practical matters.

Another question worth pondering is whether the older worldviews like Christianity are really “ism’s” at all. As an example, are Judaism and Christianity really “dualisms”? We don’t refer to Christians as following Christianism or to them as Christianists. Speaking as Christians, is our worldview merely what we over history have experienced in reality extended from our personal consciousness out into the limits of what God allows us to perceive, from, let’s say, hard matter & energy to “softer” spirit or ideas? More a continuous experience over a spectrum than a binary or dualistic one?

We should emphasize before ending that, as a Western philosopher, Ms. McWhorter embraces a position that’s in direct opposition to Sir Roger Scruton. He was an analytic philosopher in the Anglo tradition who believes in truth, as defined, and she is a postmodernist philosopher in the Continental tradition; a relativist, as defined. Nonetheless, we are reasonably certain Sir Roger would say that Ms. McWhorter’s brief presentation of Kant and the predominant Western view today is fair.

A learned man once said that the three great questions of philosophy are: What can we know? How to live a good life? And how should we govern ourselves? Worldview is ongoing applied philosophy, theology, social science, science, and practical experience. Most are born into one and ours never stop changing. As suggested in the famous Biblical passage at top, all should seek wisdom, ultimately a gift.