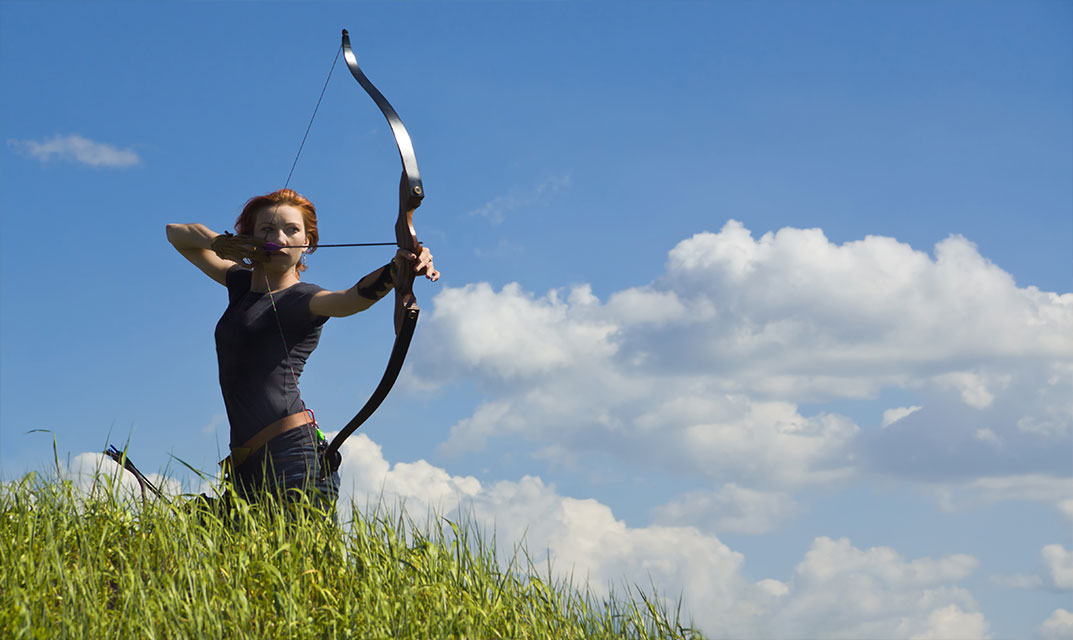 This morning we offer our second in a series of regular posts entitled Our Story. The series presents short video clips of Praxis Circle Contributors talking about important, personal events that shaped their worldview.

We opened Our Story last month with Dr. Os Guinness, where he describes his boyhood experience in China through age ten. That story is a whopper, and we commend it again, if you missed it.

In Dr. Guinness’ most recent book, Carpe Diem Redeemed (2019, pages 119 – 122), he describes in more detail how his family was trapped and nearly destroyed in China’s murderous chaos of the 1940’s, involving the fall of the Chinese empire, the Japanese invasion, and the nationalist – communist civil war, resulting in the dictatorship of Mao Zedong.

Dr. Guinness’ parents were second generation medical missionaries from the family now famous worldwide for Guinness beer. Somehow, Dr. Guinness (as a baby) and his mother and father survived the torrent of desperate refugees they joined, while his two older brothers did not.

In sum, it’s easy to understand how these circumstances produced one of Western civilization’s greatest fans and critics, as well as one of its most dedicated Christians.

Near the end, Carpe Diem Redeemed describes how Dr. Guinness’ “small” personal story fits into a much larger and still ongoing story of hope:

His grandparents left Britain in the late 1800’s for China dedicated to medicine and Christ; the Communists did everything possible to destroy Christianity in China (including murdering Christians en masse) after his family were released to Britain; and today China includes one of the world’s largest Christian populations, growing at a rapid pace.

Our Story today presents another exceptional childhood, that of Dr. Ladelle McWhorter, the former head of the University of Richmond’s Philosophy Department.

Where Dr. Guinness’ case involves a prominent British family in an exotic location (to average Americans) under horrendous circumstances, Dr. McWhorter’s early life involves, as she describes, a traditional white, blue collar Christian family located in the heart of the South in Birmingham, Alabama, where life normally should have been been quite safe & sound, and even sleepy – had it not been the 1960’s:

Furthermore, what happens in Dr. McWhorter’s early life leads her in the exact opposite direction of Dr. Guinness – she eventually changes her worldview to reject Christianity and its monotheistic god and is drawn to Michel Foucault, a French philosopher (not particularly well known at the time), and to an activist postmodernism.

As Dr. McWhorter explains clearly, she admired her family’s courageous stance against racism attributed largely to their Christian worldview, but that version of Christian worldview eventually turned squarely against her, due to her lesbian sexuality:

We encourage you to review all of Dr. McWhorter’s interview linked at the top of this page. (It appears at the bottom of the linked page, and you can review the topic of each video by waving the cursor over each clip.)

We end Dr. McWhorter’s Our Story post featuring her landing early on an interest in philosophy through a fascination with Zeno, an ancient Greek philosopher of the 5th century, B.C., from Southern Italy who was an elder contemporary of Socrates and Plato. Zeno was a follower of Parmenides, whose school of thought is credited with creating metaphysics, philosophy’s endeavor to describe reality.

In the video above, Dr. McWhorter describes Zeno’s arrow and its famous paradox.

Of course, for good reasons, the ancients were fascinated with bows and arrows, and they frequently used shooting as a metaphor to describe truth, life purpose, virtue, and sin. Aristotle believed that everything has a telos or purpose, and getting it right was hitting the mark and getting it wrong was missing it.

(Which makes perfect sense to us, if one believes in truth and reality.)

In any case, in our Praxis Circle of ongoing worldview formation, our stories develop from the “Circle” of others’ worldviews we encounter, as well as from the realities of our own situation and experience. Overall, “Praxis” involves meshing issues of theory versus reality, nurture versus nature, the one versus the many, and it involves stories of fate, chance, and free will.

We all influence each other with at least two things we know to be true:

PS – We end each Our Story post with an excerpt from a popular worldview book that gave this blog series its name, and we highly recommend it to anyone interested in current American worldview issues – Hidden Worldviews: Eight Cultural Stories that Shape Our Lives  (2009), by Steve Wilkens and Mark Sanford.

Hidden Worldviews describes the process creating one’s worldview along with one’s personal story. These stories are usually interesting, and often dramatic, entertaining, or fun; we all can and do learn from each other. In fact, that’s how we find meaning and become whomever we are. 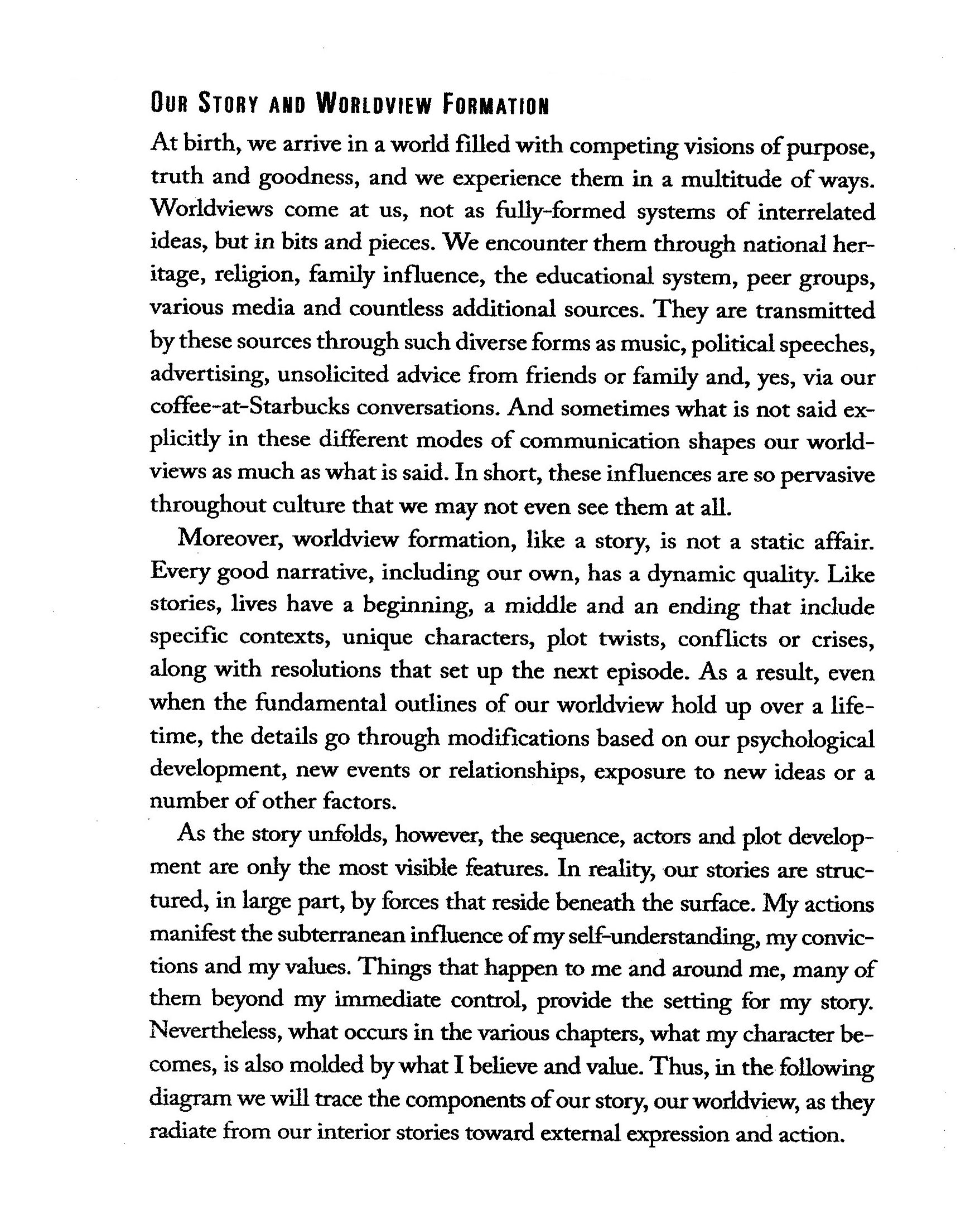 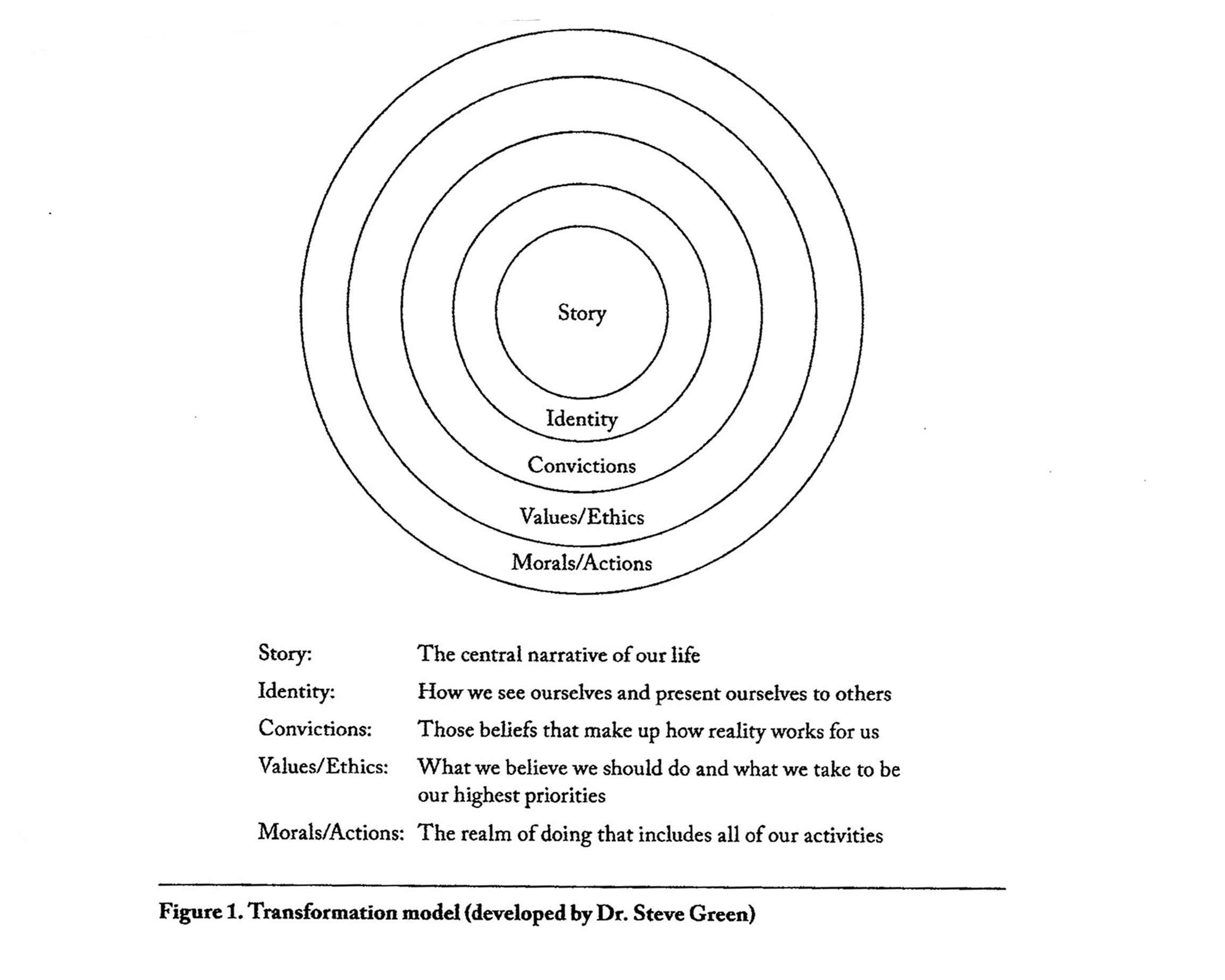