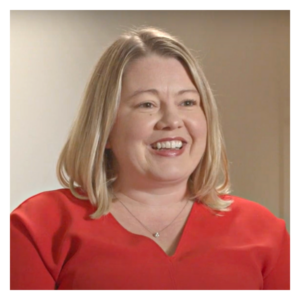 Ashley McGuire is a Senior Fellow with The Catholic Association and the author of Sex Scandal: The Drive to Abolish Male and Female. Praxis Circle interviewed Mrs. McGuire because of her noted success at a young age as a journalist and author, her position as a leader in rethinking feminism, her skillful articulation of the Catholic faith and Christian orthodoxy as a lay person, and her dedication to interpreting Christian morality in harmony with biological truth.

Originally from the West, Mrs. McGuire attended Tufts University in Medford, Massachusetts where she earned a B.A. in Political Science and Spanish. She then went on to work for the Becket Fund for Religious Studies in 2007 as their Director of Programs until she received a Philips Foundation Robert Novak Journalism Fellowship in 2011, officially launching her full-time writing career.

In 2012, Mrs. McGuire joined the Catholic Association as a Senior Fellow. She has since become a sought-out voice on religious freedom, the pro-life movement, gender, and feminism. Mrs. McGuire has appeared on CNN, CBS, FOX, PBS, EWTN, and BBC; her writing has been featured in the New York Times, the Wall Street Journal, the Washington Post, USA TODAY, TIME magazine, First Things, RealClearPolitics, The Weekly Standard, The Federalist, the New York Post, The Huffington Post, and others; and spoken at universities such as New York University, Princeton University, and Yale Law School.

Mrs. McGuire is also the first Richard John Neuhaus Fellow at the Becket Fund for Religious Studies, the editor of the Institute for Family Studies blog, and the recipient of the Susan B. Anthony List’s Young Pro-Life Leader award.

In 2017, Mrs. McGuire published her first book, Sex Scandal: The Drive to Abolish Male and Female. This consequential book is one of the best in speaking into the gender identity crisis and the gender wars of today.

Mrs. McGuire currently lives in Washington, D.C. with her husband and three children.

Ashley McGuire - How did you become a successful writer? (AM-1)

Ashley McGuire - Childhood Years in the West (AM-3)

Ashley McGuire - About the Catholic Association (AM-5)