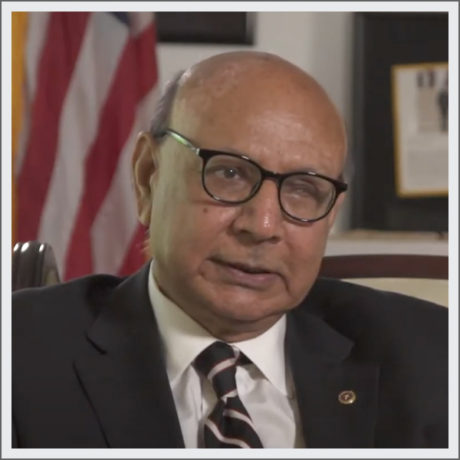 Khizr Khan is an attorney with KM Khan Law and was recently commissioned by President Biden to the United States Commission on International Religious Freedom. He was born in Pakistan, where he grew up as the oldest of ten children and graduated from the University of Punjab with an LL.B.

Praxis Circle interviewed Mr. Khan because of his fascinating life journey from Pakistan to America, his deep devotion to the founding principles of the Declaration of Independence and the U.S. Constitution, and his interests in reconciliation between Muslims and Christians, in part, through a joint vision of freedom.

Shortly after graduating and marrying his wife, Ghazala, they moved to Dubai. There Mr. Khan worked until able to immigrate in 1980 to the United States. Subsequently, Mr. Khan graduated from the University of Missouri and Harvard University with LL.M. degrees. Mr. and Mrs. Khan had three sons, two while living in Dubai, and the youngest after moving to the U.S.

Following the death of their middle son, Humayun, who was serving in the U.S. Army in Iraq (posthumously awarded the Purple Heart and the Bronze Star Medal), Mr. Khan was invited to speak at the 2016 Democrat National Convention. During his comments there, Mr. Khan held up a pocket copy of the Constitution, long carried in his pocket.

Since coming into the national spotlight, Mr. Khan has published his memoir, An American Family: A Memoir of Hope and Sacrifice, and This is Our Constitution: Discover America with a Gold Star Father. In addition to his law practice, he is active speaking publicly about the Constitution and his family’s experiences.

In 2010 he founded a pro bono project offering free legal services to veterans and their families, as well as active service members and their families. Mr. Khan and Ghazala are also active with ROTC program at the University of Virginia, where two of their sons graduated.

Khizr Khan - How do you think about worldview? (KK-3)

Khizr Khan - What worldview were you born into? (KK-4)

Khizr Khan - Are all humans worshiping the same God? (KK-6)